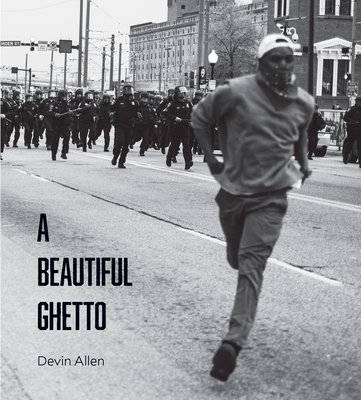 On April 18, 2015, the city of Baltimore erupted in mass protests in response to the brutal murder of Freddie Gray by police. Devin Allen was there, and his iconic photos of the Baltimore uprising became a viral sensation.

In these stunning photographs, Allen documents the uprising as he strives to capture the life of his city and the people who live there. Each photo reveals the personality, beauty, and spirit of Baltimore and its people, as his camera complicates popular ideas about the ghetto.

Allen's camera finds hope and beauty doing battle against a system that sows desperation and fear, and above all, resistance, to the unrelenting pressures of racism and poverty in a twenty-first-century American city.

Devin Allen, a Baltimore native, is only the third amateur photographer to have their photograph appear on the cover of Time. His work has also been featured in New York Magazine, the Washington Post, the New York Times, CNN, BBC, NBC News, Aperture Magazine, and Yahoo!. Allen's photographs have been exhibited in the Smithsonian. D. Watkins is the Editor At Large for Salon. His work has been published in the New York Times, Guardian, Rolling Stone, and other publications. He holds a master's in Education from Johns Hopkins University and an MFA in Creative Writing from the University of Baltimore. He is a college professor at the University of Baltimore and founder of the BMORE Writers Project. Watkins has been the recipient of numerous awards including Ford's Men of Courage and a BME Fellowship. Watkins is from and lives in East Baltimore. He is the author of The Cook Up: A Crack Rock Memoir and The Beast Side: Living (and Dying) While Black in America