The Inner Reaches of Outer Space: Metaphor as Myth and as Religion (Collected Works of Joseph Campbell) (Paperback) 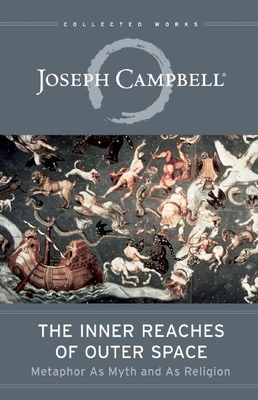 The Inner Reaches of Outer Space: Metaphor as Myth and as Religion (Collected Works of Joseph Campbell) (Paperback)


Available in Warehouse. Wait for Email Confirmation for ETA
In these pages, beloved mythologist Joseph Campbell explores the Space Age. He posits that the newly discovered laws of outer space are actually within us as well, and that a new mythology is implicit in that realization. But what is this new mythology? How can we recognize it? Campbell explores these questions in the concluding essay, "The Way of Art," in which he demonstrates that metaphor is the language of art and argues that within the psyches of today's artists are the seeds of tomorrow's mythologies. Campbell writes in his introduction: "My desire and great pleasure in the preparation of this little volume has been as rendering a return gift to the Graces for the transforming insights of these recent years, which...we have been testing out in a broadly shared spiritual adventure.
Joseph Campbell (1904-1987) is widely credited with bringing mythology to a mass audience. His works, including the four-volume The Masks of God and The Power of Myth (with Bill Moyers), rank among the classics in mythology and literature.

In a time of felt mythlessness, when the culture suffers a crunching literalism in politics, in religion, and in everyday human relationships, Campbell’s little book on the metaphoric and mythic quality of life functions as a grand net of gems.”
David L. Miller, Watson-Ledden professor of religions, Syracuse University

Campbell, who is known for speaking his mind, pulls no punches here. This book, more than any other, unambiguously delineates his basic understanding of mythology and religion....Inveterate underliners will be tempted to highlight things on virtually every page.”
Parabola

The wealth and breadth of reference in this small book is truly prodigious...as Campbell now soars like an eagle to a generalization about The Big Bang, now dives like a hawk to a precise description of the color and number of lotus petals in each of the seven centers of the chakra system, rendering both lucid in a single universe of discourse.”
Newsday