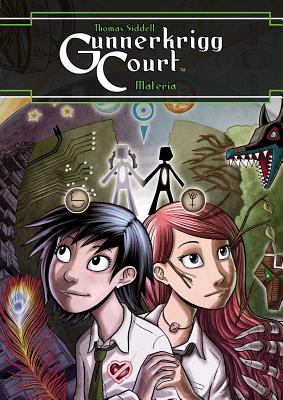 This is book number 4 in the Gunnerkrigg Court series.

Being a teenager is tough. Even more so at the magical and mysterious school, Gunnerkrigg Court.

Antimony Carver and her best friend Kat continue to uncover terrible secrets about their eccentric school, Gunnerkrigg Court, as their second year comes to a close. If navigating the dangerous world of teenage relationships weren’t hard enough, Annie and her fellow Mediums In Training learn that there is a far more to their powers than they could have imagined. They must take things into their own hands if they want to get to the bottom of the Court’s dark past.

Thomas Siddell’s popular and award-winning webcomic (www.gunnerkrigg.com) is here, collected in print for fans and new readers alike.
Thomas Siddell is English, and resides in Birmingham. He has a day job as an animator for a video game company, and he rides the bus to work every day.