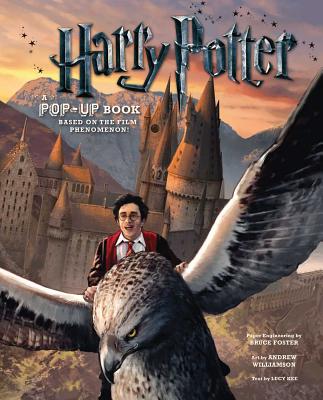 By Andrew Williamson, Lucy Kee (With), Bruce Foster (With)


Available in Warehouse. Wait for Email Confirmation for ETA
The first ever illustrated Harry Potter pop-up book, based on the creative work of the most successful film franchise in history, Harry Potter: The Pop Up Book is the must have pop-up gift for Potter fans and aspiring wizards!

This collectible Harry Potter pop-up book, based on the creative development of the films, features exquisite original artwork by Andrew Williamson, concept artist for all eight movies. With dynamic pop-ups animating memorable moments and locations — like the Triwizard Tournament, Diagon Alley, and Hogwarts Castle — Harry Potter: A Pop-Up Book offers a 3-D glimpse into the amazing world, as seen in the films. This deluxe book will delight Harry Potter fans with dynamic pop-up ingenuity, insights from the creative team who turned JK Rowling’s stories into movie magic, fascinating facts about the magical universe seen in the movies, and Harry Potter memories and memorabilia packed into every page.
Andrew Williamson has worked as a lead concept artist on all of the Harry Potter films, including the forthcoming Harry Potter and the Deathly Hallows: Part I and Part II. Trained as an architect at Cambridge University and certified in 1990, he worked on the new British Library at Euston and a number of commercial and residential projects. His work has been published in numerous architectural publications, The Art of Batman Begins (2005), and he is currently developing a series of comic book projects.

Lucy Kee is a writer and editor living in the San Francisco Bay Area. As a longtime Harry Potter fan she was thrilled to see the wizarding world come to life in pop-up form, and to explore the work of the filmmakers behind the magic.