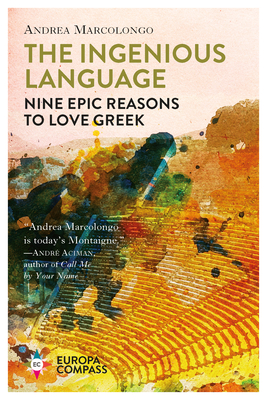 By Andrea Marcolongo, Will Schutt (Translator)

"A brilliant meditation on language and life."--Bookriot

For word nerds, language loons, and grammar geeks, an impassioned and informative literary leap into the wonders of the Greek language. Here are nine ways Greek can transform your relationship to time and to those around you, nine reflections on the language of Sappho, Plato, and Thucydides, and its relevance to our lives today, nine chapters that will leave readers with a new passion for a very old language, nine epic reasons to love Greek.

The Ingenious Language is a love song dedicated to the language of history's greatest poets, philosophers, adventurers, lovers, adulterers, and generals. Greek, as Marcolongo explains in her buoyant and entertaining prose, is unsurpassed in its beauty and expressivity, but it can also offer us new ways of seeing the world and our place in it. She takes readers on an astonishing journey, at the end of which, while it may still be Greek to you, you'll have nine reasons to be glad it is.

No batteries or prior knowledge of Greek required.

Andrea Marcolongo is an Italian journalist, writers, Classics scholar, and former speech writer for Prime Minister Matteo Renzi. The Ingenious Language was a bestseller in Italy and in many of the other dozen countries in which it has thus far been published. She is also the author of The Heroic Measure. Will Schutt is the author of Westerly, winner of the 2012 Yale Series of Younger Poets award. His poems and translations have appeared in Agni, Narrative, The New Republic, and The Southern Review. For his translations of poems by Edoardo Sanguineti he received grants from the NEA and PEN/America. He lives in Baltimore.