Cleveland in the Gilded Age: A Stroll Down Millionaires' Row (American Chronicles) (Paperback) 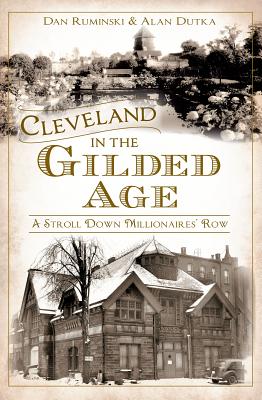 Cleveland in the Gilded Age: A Stroll Down Millionaires' Row (American Chronicles) (Paperback)

Cleveland storyteller Dan Ruminski discovered that the 6 acres under his home were originally part of a 1,400-acre grand estate known as the Circle W Farm.

The impressive estate was created by Walter White, founding brother of the White Motor Company. Drawn in by the fascinating history, Ruminski's investigation soon embraced the full legacy of Cleveland's industrial history and the indomitable characters who created the city's Gilded Age. John D. Rockefeller, Samuel Mather and more giants of industry built Cleveland's Millionaires' Row. Come peek inside the once-grand mansions these millionaires called home and hear the delightful stories that bring the past to life. Join Ruminski and Alan Dutka on a return to this section of Euclid Avenue, which wasn't merely the most stunning show of wealth in Cleveland but also in the entire country.