The Enigma of Felix Frankfurter (Paperback) 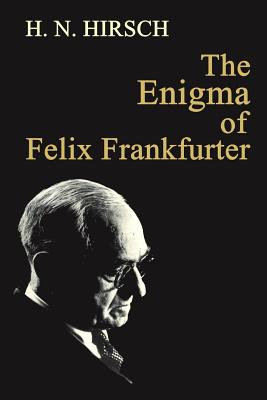 The Enigma of Felix Frankfurter (Paperback)


Available in Warehouse. Wait for Email Confirmation for ETA
This book cannot be returned, cancelled, or exchanged. Please call for availability and pricing
A recognized, fascinating, and often-cited classic of judicial biography and Supreme Court insight is now available in a new paperback edition. Felix Frankfurter was perhaps the most influential jurist of the 20th century-and one of the most complex men ever to sit on the U.S. Supreme Court. Mysteries and apparent contradictions abound. A vibrant and charming friend to many, why are his diaries so full of vitriol against judicial colleagues, especially Douglas and Black? An active Zionist, why did he so zealously enjoy the company of Boston Brahmins, whose snobbery he detested? Most puzzling of all: why did someone known before his appointment to the Court as a civil libertarian-even a radical-become our most famous and persistent advocate for austere judicial restraint? In answering these and other questions, this pathbreaking biography of Frankfurter explores the personality of the man as a key to understanding the Justice. Hirsch sees in Frankfurter's fascinating and complex persona a clue to the biggest mystery of all: the contrast between the brilliant and ambitious young immigrant rising by his intellect and charm to leadership in U.S. academic and political life; and the judge, equally brilliant, but increasingly isolated, embittered, and ineffective. "Hirsch's well-written book ... dispels the contradictory image that has long mystified students of Felix Frankfurter. His portrait is unvarnished, yet scrupulously fair. Revealed is a consummate manipulator of public men and policy. No future biographer can safely ignore the brilliant biographical work." - Alpheus Thomas Mason Princeton University "Hirsch's carefully constructed and supported psychological analysis of Justice Frankfurter gives us an exciting look at the inner workings of the Supreme Court." - Martin Shapiro University of California, Berkeley A new addition to the Legal History & Biography Series from Quid Pro Books.
H. N. Hirsch is currently Professor of Politics at Oberlin College, where he has also served as Dean of the Faculty of Arts and Sciences. Previously, he held an endowed chair at Macalester College in Minnesota, and served for fourteen years at the University of California, San Diego and as Assistant Professor at Harvard.