The Great Railroad Revolution: The History of Trains in America (Paperback) 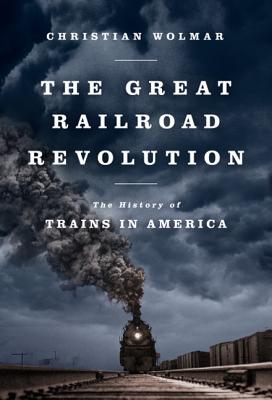 The Great Railroad Revolution: The History of Trains in America (Paperback)


Available in Warehouse. Wait for Email Confirmation for ETA
America was made by the railroads. The opening of the Baltimore & Ohio line -- the first American railroad -- in the 1830s sparked a national revolution in the way that people lived thanks to the speed and convenience of train travel. Promoted by visionaries and built through heroic effort, the American railroad network was bigger in every sense than Europe's, and facilitated everything from long-distance travel to commuting and transporting goods to waging war. It united far-flung parts of the country, boosted economic development, and was the catalyst for America's rise to world-power status.

Every American town, great or small, aspired to be connected to a railroad and by the turn of the century, almost every American lived within easy access of a station. By the early 1900s, the United States was covered in a latticework of more than 200,000 miles of railroad track and a series of magisterial termini, all built and controlled by the biggest corporations in the land. The railroads dominated the American landscape for more than a hundred years but by the middle of the twentieth century, the automobile, the truck, and the airplane had eclipsed the railroads and the nation started to forget them.

In The Great Railroad Revolution, renowned railroad expert Christian Wolmar tells the extraordinary story of the rise and the fall of the greatest of all American endeavors, and argues that the time has come for America to reclaim and celebrate its often-overlooked rail heritage.
Christian Wolmar is a writer and broadcaster, specializing in transportation matters. He has written for major British newspapers for many years and has contributed to many other publications, including the New York Times and Newsday. His most recent books are Blood, Iron, and Gold; Engines of War; and The Great Railroad Revolution. He lives in London.