Testimonies for the Church Volume 1 (Hardcover) 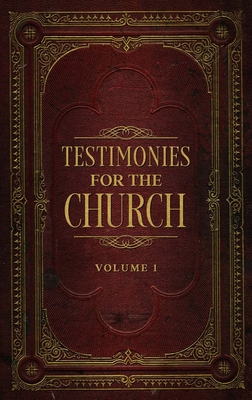 Testimonies for the Church Volume 1 (Hardcover)

This is the first volume of a 9-book series by Ellen G. White entitled Testimonies for the Church which was started as instruction and guidance to the Seventh-day Adventist Church during its infancy (during the late 1840's and early 1850's). During that time, there were only four ministers serving the entire denomination. The ministers, who supported themselves through physical labor, were poor in this world's goods but rich in the gospel. By 1855, membership in the fledgling denomination had grown from less than a hundred to more than a thousand. During those years of growth, opposition by a group called the "Messenger Party" brought much sorrow and perplexity to the believers. Fanatical movements also divided and distracted from time to time. Discouraged by the fact that Jesus had not come in 1844, the church was in danger of losing its "first love."

With the Gold Rush and westward movement, those years were also a time of speculation in homesteads and land. As a result, these testimonies contain more than a few earnest warnings about the dangers of conformity to the world. Calls to deeper consecration on the part of church members were also frequent.

In late 1856, Advent believers began to recognize themselves as "lukewarm" and in need of heeding the counsel of the "True Witness" witness of Revelation 3. Mightily stirred by this message, the believers expected the loud cry of the third angel to take place very soon. The earnest messages of Testimonies Volume One can be better understood with this background in mind.

The times of this volume were also filled with discussion and debate. Adventist ministers, including one prominent one named Moses Hull, were often challenged to debate about the Sabbath or even with Spiritualists. Moses Hull's ill-advised debates with spiritualists, which led to his ultimate spiritual demise, were addressed in some of the counsels included in Volume One.

During the times of this volume, steps were also being taken to organize the Seventh-day Adventist Church. There was much discussion about the idea of organization, as opponents of the move argued that the idea of organization itself came straight from Babylon. Also notable during this period was the introduction of health reform in 1863. After Ellen White received a vision that emphasized the relationship between the laws of health and spiritual development, she began to admonish the members on this topic. Reforms in dress were also closely related to the health reform movement.

Additional counsel led the members to establish the Health Reform Institute. During the American Civil War, guidance was also needed-and provided-about the proper relationship between the church and civil government.

Other notable topics covered during those formative years (and included in Testimonies for the Church Volume One) included the importance of the home in the building of Christian character, the responsibility of parents, and admonitions for the youth. Counsel and admonition for the church body was also included. All in all, the counsels in Volume One spanned a very important phase in the development of the Seventh-day Adventist Church and were very influential in its development.