Testimonies for the Church Volume 8 (Hardcover) 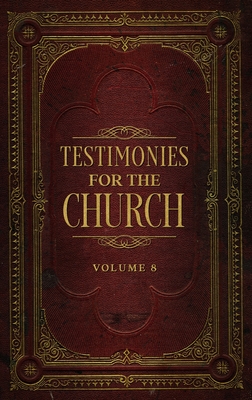 Testimonies for the Church Volume 8 (Hardcover)

Volume 8 of the Testimonies (which was written by Ellen G. White for members of the Seventh-day Adventist Church) was published in 1904 to meet a crisis within the church. That crisis involved the ideas of pantheism-which was out of harmony with both the Word of God and the teachings of the church. By its promoters, pantheism was seen as an advancement in understanding which would bring a glorious experience to the people of God and hasten the finishing of the work.

Rather than seeing God as a personal being, pantheists envision Him as a power or force pervading the atmosphere. Confusing the power of God with His personality, they saw God in the sunshine, in the flower, in the grass, in the tree, and in their fellow human beings. Despite the efforts of church leaders, the pantheistic movement continued to grow and gain momentum within the church. Things came to a head when Dr. John Harvey Kellogg, the leading Adventist physician of the day and founder of the Battle Creek Sanitarium, wrote a book on health which also, in a subtle way, set forth pantheist views. Testimonies for the Church Volume 8 clarified the issues on pantheism, which was causing so much confusion at the time.

Just weeks after this volume had come off the press, the factory of the Review and Herald Publishing Association was destroyed by fire. This was the second great disaster in Battle Creek and followed the sanitarium fire by less than eleven months. Given the counsel on not congregating in one place, these catastrophes presented a prime opportunity for the church to disperse its work to other areas of the country and world.

Under chapters with titles like "Counsels Often Repeated" and "Present Opportunities," Ellen White urged the church to diversity and avoid the mistakes of the past. In this volume, Ellen White also reminded her readers that the thoughts of God's people should not be diverted from their true work by fanaticism or doctrinal arguments over the Godhead. The warnings of the section "Be On Guard" and the clear explanation of truth in the group of chapters on "The Essential Knowledge," which continue to keep the church from misleading teachings, continue to be of great benefit even today.