The Stoning of Soraya M.: A Story of Injustice in Iran (Paperback) 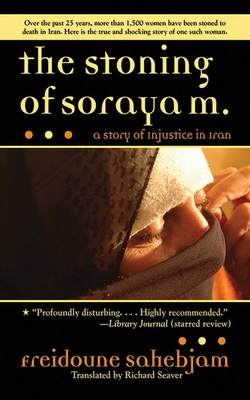 The Stoning of Soraya M.: A Story of Injustice in Iran (Paperback)


This title is likely unavailable. Email or call for price and availability.
Soraya M.’s husband, Ghorban-Ali, couldn’t afford to marry another woman. Rather than returning Soraya’s dowry, as custom required before taking a second wife, he plotted with four friends and a counterfeit mullah to dispose of her. Together, they accused Soraya of adultery. Her only crime was cooking for a friend’s widowed husband. Exhausted by a lifetime of abuse and hardship, Soraya said nothing, and the makeshift tribunal took her silence as a confession of guilt. They sentenced her to death by stoning: a punishment prohibited by Islam but widely practiced.

Day by day—sometimes minute by minute—Sahebjam deftly recounts these horrendous events, tracing Soraya’s life with searing immediacy, from her arranged marriage and the births of her children to her husband’s increasing cruelty and her horrifying execution, where, by tradition, her father, husband, and sons hurled the first stones. A stark look at the intersection between culture and justice, this is one woman’s story, but it stands for the stories of thousands of women who suffered—and continue to suffer—the same fate. It is a story that must be told.
Freidoune Sahebjam, the son of a former Iranian ambassador, is a journalist who was sentenced to death in absentia for his undercover reporting criticizing the Iranian government. He lives in hiding in France.