Ann the Word: The Story of Ann Lee, Female Messiah, Mother of the Shakers, the Woman Clothed with the Sun (Paperback) 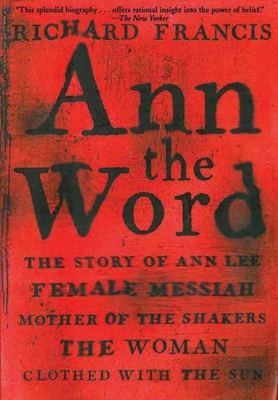 Ann the Word: The Story of Ann Lee, Female Messiah, Mother of the Shakers, the Woman Clothed with the Sun (Paperback)


This title is likely unavailable. Email or call for price and availability.
Ann Lee is perhaps one of the most remarkable and mystifying women in the history of Western culture. Few could have imagined that humble beginnings in Manchester, England, would lead to the illiterate daughter of a blacksmith overcoming personal anguish and increasingly Puritanical sentiments in England and rising to become a visionary religious leader, thought by her followers to have been the second incarnation of Christ.

After the deaths of her four children, Ann was committed to an insane asylum. While committed she received the revelation that she was Ann the Word, the female embodiment of Christ. Upon her release, she assumed leadership of the Shaking Quakers, or Shakers, a local religious cult known for erratic fits of divine shaking, passionate song and dance, speaking in tongues, and a belief that the millennium heralding the end of the world had come. Escaping persecution, she emigrated with a small band of Shakers to America in 1774. Charges of witchcraft and spying followed Lee wherever she went as she began an ambitious mission of conversion, establishing communities across New England.

In the first serious biography about this spirited, captivating leader, Richard Francis provides “the best portrait to date of . . . [a] heroic, indomitable, mesmerizing woman” (Sunday Telegraph), a trail-blazer whose feminizing influence upon Christianity was marked progress for women of her time and long after. He also demonstrates the aura and strangeness of the radical Shakers during their militant years and in so doing, poignantly recreates a “remote prophetic world” (Evening Standard), bursting with mystery and intrigue.