Jonathan Swift's Word-Book: A Vocabulary Compiled for Esther Johnson and Copied in Her Own Hand (Hardcover) 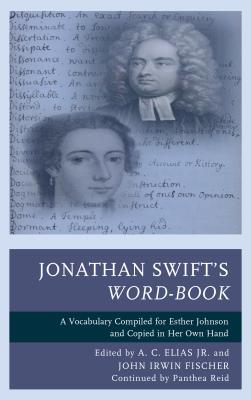 Jonathan Swift's Word-Book: A Vocabulary Compiled for Esther Johnson and Copied in Her Own Hand (Hardcover)


This title is likely unavailable. Email or call for price and availability.
This Word-Book is presumably the only work of Jonathan Swift's not in print, until now. Since the 1690s, Swift had been formulating a list of words and definitions for his prot g Esther Johnson, beginning with terms from the Book of Common Prayer. His was apparently an on-going list, kept rather haphazardly, with open spaces for adding new words. About 1710, when Swift was in London, Johnson, in Dublin, set out to formalize the dictionary, copying out Swift's words and definitions to make an orderly and careful book with no blank spaces. Probably in 1713, when Swift returned to Ireland, Johnson presented her Word-Book to him, but his school-masterly corrections of her work may have offended her. After Johnson's death in 1728, Swift gave the Word-Book to their mutual friend, Elizabeth Sican. It was passed down over generations, until in 1976, the young American Swiftian A. C. Elias, Jr., bought it, intending to edit it in his old age. Before his early death of lung cancer in 2008, Elias asked John Fischer to assume the challenge of bringing the book into print. Fischer took on the task until 2015, when he too died of a lung disease. His wife Panthea Reid completed the task for her husband. This volume includes illustrations from the original book, a transcript of it with schematic indications of Swift's corrections, essays and appendices by Fischer and Elias, tracing provenance, exploring the social and psychological milieu in which the book was written, and tracking Swift's work as a lexicographer. This appearance of Swift's last book to be printed is a publishing event.
The late A.C. Elias Jr. was an independent scholar based in Philadelphia. The late John Irwin Fischer taught at Louisiana State University Baton-Rouge. Panthea Reid is professor of English emerita at Louisiana State University.