The Founding Mothers of Mackinac Island: The Agatha Biddle Band of 1870 (Paperback) 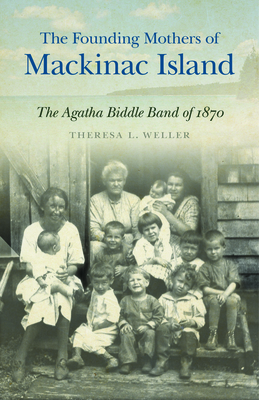 The Founding Mothers of Mackinac Island: The Agatha Biddle Band of 1870 (Paperback)


Available in Warehouse. Wait for Email Confirmation for ETA
Drawing on a wide array of historical sources, Theresa L. Weller provides a comprehensive history of the lineage of the seventy-four members of the Agatha Biddle band in 1870. A highly unusual Native and Métis community, the band included just eight men but sixty-six women. Agatha Biddle was a member of the band from its first enumeration in 1837 and became its chief in the early 1860s. Also, unlike most other bands, which were typically made up of family members, this one began as a small handful of unrelated Indian women joined by the fact that the US government owed them payments in the form of annuities in exchange for land given up in the 1836 Treaty of Washington, DC. In this volume, the author unveils the genealogies for all the families who belonged to the band under Agatha Biddle’s leadership, and in doing so, offers the reader fascinating insights into Mackinac Island life in the nineteenth century.
THERESA L. WELLER has been published in Michigan’s Habitant Heritage, St. Ignace News, and the Mackinac Island Town Crier. She is a member of the Sault Ste. Marie Tribe of Chippewa Indians.
This is a must-read for anyone seeking genealogical information on French-Canadian or Native American ancestors who lived in the Upper Great Lakes area during the nineteenth century. It took a superb historical researcher like Theresa L. Weller to finally unravel the personal and social history of the residents of Mackinac Island that has stymied so many other researchers. Besides providing much data on the people who made up the nineteenth-century island communities, Weller provides fascinating biographical information, which together helps us to understand life on the Michigan frontier during the fur trade era.—Charles E. Cleland, distinguished professor emeritus, Michigan State University, and author of Faith in Paper: The Ethnohistory and Litigation of Upper Great Lakes Indian Treaties


Theresa L. Weller has done a wonderful service for historians, Native Americans, and genealogists in researching the Agatha Biddle band in the Durant Field Notes. Hopefully, this book will inspire others to examine the rich history of Michigan’s Anishinaabe people, including the interaction of the Native Americans and whites. As the author points out, there are errors in the Field Notes that may not always be visible. Thanks to Weller for an interesting study and bringing to life “just names.”—James P. LaLone, cofounder and past president of the French-Canadian Heritage Society of Michigan