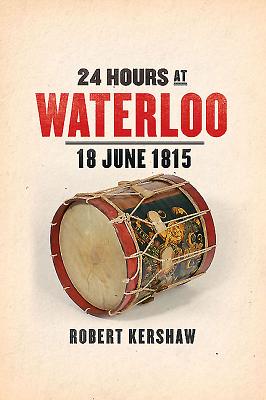 
This title is likely unavailable. Email or call for price and availability.
The epic and brutal battle of Waterloo was a pivotal moment in history--when the events of a single day defined the course of Europe's future. In this vibrant and exhilarating hour-by-hour portrayal of the battle, a renowned historian joins his voice with the eyewitness accounts of those who fought it. For example: "One of the lancers rode by, and stabbed me in the back with his lance. I then turned, and lay with my face upward, and a foot soldier stabbed me with his sword as he walked by. Immediately after, another, with his firelock and bayonet, gave me a terrible plunge, and while doing it with all his might, exclaimed, 'Sacre nom de Dieu '" In March 1815, the Allies declared war on Napoleon in response to his escape from exile and his renewed threat to imperial European rule. Three months later, on 18 June 1815, having suffered considerable losses at Quatre-Bras, Wellington's army fell back on Waterloo, some ten miles south of Brussels. Halting on the ridge, they awaited Napoleon's army, blocking its entry to the capital. This would become the Allies' final stand, the infamous battle of Waterloo. In this intimate, hour-by-hour account, acclaimed military historian Robert Kershaw resurrects the human stories at the center of the fighting, creating an authoritative single-volume biography of this landmark battle. Drawing on his profound insight and a field knowledge of military strategy, Kershaw takes the reader to where the impact of the orders was felt, straight into the heart of the battle, shoulder to shoulder with the soldiers on the mud-splattered ground. Masterfully weaving together painstakingly researched eyewitness accounts, diaries and letters--many never before seen or published--this gripping portrayal of Waterloo offers unparalleled authenticity. Extraordinary images of the men and women emerge in full color; the voices of the sergeants, the exhausted foot-soldiers, the boy ensigns, the captains and the cavalry troopers, from both sides, rise from the page in vivid and telling detail, as the fate of Europe hangs by a thread.