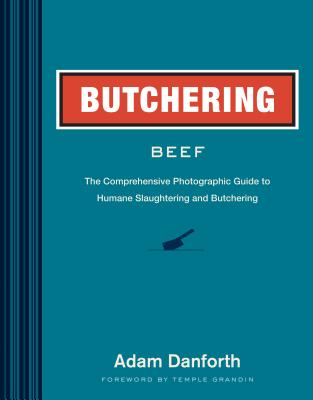 Learn how to humanely slaughter cattle and butcher your own beef. In this straightforward guide, Adam Danforth provides clear instructions and step-by-step photography of the entire butchering process, from creating the right preslaughter conditions through killing, skinning, keeping cold, breaking the meat down, and perfecting expert cuts. With plenty of encouragement and expert advice on food safety, packaging, and necessary equipment, this comprehensive guide has all the information you need to start butchering your own beef.

Adam Danforth is the author of Butchering Chickens, Butchering Beef, and Butchering Poultry, Rabbit, Lamb, Goat, and Pork, which won both an IACP Award and a James Beard Award. Danforth trained at the professional meat processing program at SUNY Cobleskill, one of the only such programs in the United States, before going to work at Marlow and Daughters in New York City. He leads experiential workshops worldwide on butchery and meat science for venues such as the Stone Barns Center for Agriculture, the James Beard Foundation Chefs Boot Camp, Google, and the National Bison Association. Danforth also consults and provides education to restaurants including Eleven Madison Park, Gramercy Tavern, Bazaar Meat, The Perennial, and Maude. He is the American ambassador for the Butchers Manifesto and a board member of the Chefs Collaborative and the Good Meat Project. Danforth lives in Ashland, Oregon.

Temple Grandin is the author of the New York Times bestsellers Animals in Translation and Animals Make Us Human, as well as Thinking in Pictures, Humane Livestock Handling, Improving Animal Welfare, and The Autistic Brain. Dr. Grandin’s humane livestock facility designs have been adopted all over the world, and she is a consultant on animal welfare to several segments of the fast food industry. Her work has been featured on NPR, 60 Minutes, and The Today Show and in the New York Times and Time and Discover magazines. The story of her life was made into an Emmy Award-winning HBO movie titled Temple Grandin. Dr. Grandin is a Professor of Animal Science at Colorado State University.

“Adam Danforth’s two new books about butchering feature tasteful photographs and a thorough explanation of each step of the process. … [They]make you feel like you can raise and process your own livestock, and do it thoughtfully and skillfully … [and] provide new insights for all of us about butchering and its impact on the quality of meat.”

“These are not mere how-to guides: they are the equivalent of in-depth college courses. … What’s more, this is not just academic data: there are practical applications, and not only for homestead butchers. Anyone who cooks or eats meat would benefit from much of this information. … On a scale of 1-10, these easily rank 12, minimum.”

“[A] breathtaking guide through the paradoxical process of killing animals with compassion. … For those who have embraced the farm to table movement and are ready to take matters into their own hands, this is required reading. For those whose consideration of meat and poultry begins and ends at the supermarket, it is a transformative wake-up call.”

“There's an entire industry of professionals who humanely raise and slaughter animals for a living, in an intensely personal and responsible way that's to be admired. One of those professionals is Adam Danforth, the author of a new book series that sets out to educate those interested in humanely slaughtering their own food.”

“If you’re interested in self-sustainability and raising livestock for meat consumption, this book is the next step in your process. It’s informative, it’s comprehensive, and above all else, it’s reverent and respectful of the animals giving their lives so we can live ours.”

“These books were written by a man who loves livestock, and loves meat – with reverence.”