Worms Eat My Garbage, 35th Anniversary Edition: How to Set Up and Maintain a Worm Composting System: Compost Food Waste, Produce Fertilizer for Houseplants and Garden, and Educate Your Kids and Family (Paperback) 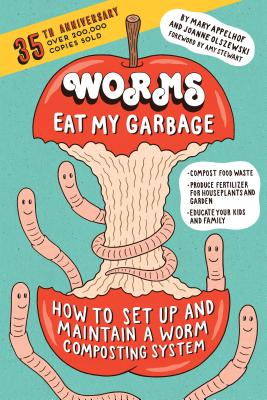 Worms Eat My Garbage, 35th Anniversary Edition: How to Set Up and Maintain a Worm Composting System: Compost Food Waste, Produce Fertilizer for Houseplants and Garden, and Educate Your Kids and Family (Paperback)


Available in Warehouse. Wait for Email Confirmation for ETA
For more than three decades, this best-selling guide to the practice of vermicomposting has taught people how to use worms to recycle food waste into nutrient-rich fertilizer for houseplants or gardens. Small-scale, self-contained worm bins can be kept indoors, in a basement, or even under the kitchen sink in an apartment — making vermicomposting a great option for city dwellers and anyone who doesn’t want or can’t have an outdoor compost pile. The fully revised 35th anniversary edition features the original’s same friendly tone, with up-to-date information on the entire process, from building or purchasing a bin (readily available at garden supply stores) to maintaining the worms and harvesting the finished compost.
Worms Eat My Garbage was originally written by Mary Appelhof (1936–2005), an international authority and lecturer on small-scale vermicomposting whose honors included a National Science Foundation grant and the National Recycling Coalition’s Recycler of the Year. Joanne Olszewski, a close friend of Appelhof’s, has updated the book for the 35th Anniversary Edition. Olszewski is a fellow vermi-enthusiast and the owner of Wormwoman Inc., which manufactures and sells the Worm-A-Way worm bin. She lives in Arkansas.

“Mary Appelhof's prescription for saving the world — in your own backyard. ... [My own worms] have proven to be surprisingly good pets: clean, industrious, self-sufficient, and always up for the job of devouring compost and enriching the soil.” — Amy Stewart, author of The Drunken Botanist

“Mary Appelhof turned complicated science into understandable and usable advice. She’s sculpted into my Mount Rushmore of the founders of the organic movement.” — Jeff Lowenfels, author of Teaming with Microbes: The Organic Gardener's Guide to the Soil Food Web