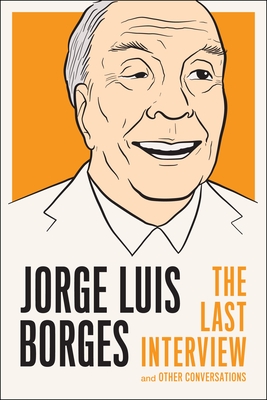 
This title is likely unavailable. Email or call for price and availability.
“Believe me: the benefits of blindness have been greatly exaggerated. If I could see, I would never leave the house, I’d stay indoors reading the many books that surround me.”
—Jorge Luis Borges

Days before his death, Borges gave an intimate interview to his friend, the Argentine journalist Gloria Lopez Lecube. That interview is translated for the first time here, giving English-language readers a new insight into his life, loves, and thoughts about his work and country at the end of his life.

Accompanying that interview are a selection of the fascinating interviews he gave throughout his career. Highlights include his celebrated conversations with Richard Burgin during Borges's time as a lecturer at Harvard University, in which he gives rich new insights into his own works and the literature of others, as well as discussing his now oft-overlooked political views. The pieces combine to give a new and revealing window on one of the most celebrated cultural figures of the past century.
Jorge Luis Borges (b. 1899, Buenos Aires, Argentina; d. 1986, Geneva, Switzerland) was an Argentine short-story writer, poet, essayist and translator. He was one of the greatest literary figures of the twentieth century, inspiring generations of writers in the US and UK as well as his native Latin America. He is most famous for the short-story collections Ficciones (1944) and The Aleph (1949).
“Borges is arguably the great bridge between modernism and post-modernism in world literature.” —David Foster Wallace, The New York Times

“Borges is the most important Spanish-language writer since Cervantes. . . . To have denied him the Nobel Prize is as bad as the case of Joyce, Proust, and Kafka.” —Mario Vargas Llosa

“Without Borges the modern Latin American novel simply would not exist.” —Carlos Fuentes

“[Borges] has lifted fiction away from the flat earth where most of our novels and short stories still take place.” —John Updike

“[Borges] engages the heart as well as the intelligence; his genius strikes, undismayed as Theseus, through the labyrinths of our life and time to the accomplishment of new, inspiring and stunningly beautiful work.” —John Barth