The Destruction of Hillary Clinton: Untangling the Political Forces, Media Culture, and Assault on Fact That Decided the 2016 Election (Paperback) 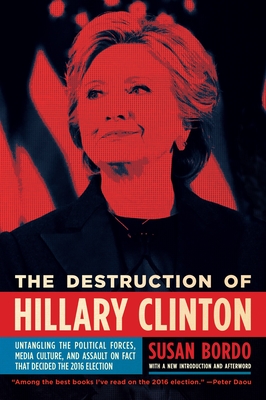 The Destruction of Hillary Clinton: Untangling the Political Forces, Media Culture, and Assault on Fact That Decided the 2016 Election (Paperback)


This title is likely unavailable. Email or call for price and availability.
“If you want to understand not only what happened in 2016, but what’s going to happen tomorrow, this book is essential reading. Susan Bordo brings a scholar’s rigor and a lioness’ heart to this important work.” —Paul Begala

“Among the best books I’ve read on the 2016 election . . . the perfect companion to Clinton’s What Happened.” —Peter Daou

NOW WITH A NEW AFTERWORD

The Destruction of Hillary Clinton is an answer to the question many have been asking: How did an extraordinarily well-qualified, experienced, and admired candidate—whose victory would have been as historic as Barack Obama's—come to be seen as a tool of the establishment, a chronic liar, and a talentless politician?

In this masterful narrative of the 2016 campaign year and the events that led up to it, Susan Bordo unpacks the Rights' assault on Clinton and her reputation, the way the left provoked suspicion and indifference among the youth vote, the inescapable presence of James Comey, questions about Russian influence, and the media's malpractice in covering the candidate.

Urgent, insightful, and engrossing, The Destruction of Hillary Clinton is an essential guide to understanding the most controversial presidential election in American history.
Susan Bordo is a media critic, cultural historian, and feminist scholar. Her books include Unbearable Weight, and, most recently, The Creation of Anne Boleyn. She is Professor of Gender and Women’s Studies at the University of Kentucky.
“If you want to understand not only what happened in 2016, but what’s going to happen tomorrow, this book is essential reading. Susan Bordo brings a scholar’s rigor and a lioness’ heart to this important work.” —Paul Begala

“Among the best books I’ve read on the 2016 election, one that provides an unvarnished look at the systematic assault on Clinton’s character. It is the perfect companion to Clinton’s What Happened.” —Peter Daou

"Feminist scholar Susan Bordo provides a definitive, disarmingly analytical take on Hillary Clinton's slow downfall in this illuminating book. She captures the disturbing intersection of gender (read: sexism) and politics in the media's coverage of the 2016 election, offering a different kind of commentary that resonates far beyond the confines of the Trump-Clinton battle." -Entertainment Weekly

"Vital. An important . . . examination of the strange political life of Hillary Clinton." —SALON

"Thoroughly researched . . . What is so satisfying—and devastating—about Bordo’s book is the way she lays it all out, weaving it together into a clear picture that allows the reader, whether they were cognizant for the Clinton Era or not, to see exactly what happened to HRC. Bordo has successfully picked apart the various threads of unfairness (there are so many that sometimes one struggles to think about it) that brought us to the conventional Hillary narrative that destroyed her.” —BUST

“For the many of us still shell-shocked by this unrecognizable America, Bordo’s book offers a clear analysis of how a candidate who received the overwhelming majority of the popular vote, did not win the presidency.” —THE FORWARD

"Bordo’s feminist analysis is concise and incisive . . . A large part of Bordo’s objective with this book is to counter the deep trove of misogynist material that has been used to discredit Hillary throughout the decades. In this regard, Bordo faces a nearly impossible task—a lone voice in the winds of misogyny. But it is admirable. Openly loving Hillary Clinton is, indeed, a radical act." —QUARTZ

"A fascinating take on the painfully long campaign and how the political upset happened." —BUSTLE

"The work of a scholar who carefully buttresses her argument with dates and facts . . . But the book is refreshing for the personal passion it exudes. Bordo conveys the intense disappointment of Hillary fans generally but especially the 'progressive baby-boomer women,' white and black, who watched with horror as the woman they had admired for years . . . was brought low." —Marjorie Spruill, author of Divided We Stand

“Essential to understanding the 2016 presidential election and the crucial caricature of untrustworthy Hillary.” —Nell Irvin Painter, author of The History of White People

"In a media landscape saturated with pieces contemplating who, what, when, where, and why Hillary Clinton lost the presidential election, only Susan Bordo appears to have taken a minute to contemplate that perhaps the same sexist witch hunt that’s been waged against Clinton for four decades could be the witch hunt that finally burned her." —Carmen Rios

"This perceptive, thoroughly readable book will strike a chord with [Clinton] supporters and prove enlightening to many others hoping to make sense of a contentious election." —BOOKLIST