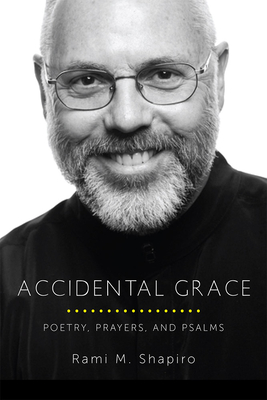 
Available in Warehouse. Wait for Email Confirmation for ETA
Spiritual teacher, writer, rabbi and poet, Rami Shapiro has taught thousands of people in workshops across North America for a quarter century. His books have sold in the hundreds of thousands. But before he did any of those things he was writing poems, prayers, and psalms that were anthologized in the Jewish siddurim of different denominations.

Now, those spiritual teachings have been gathered together, incorporating all of Rami's poetic work over the course of his long and varied career. The result is startling—as if we've discovered a new spiritual teacher of great importance, in verse.

Rami Shapiro is one of the most innovative rabbis of the last thirty years. An award-winning author of two dozen books on religion and spirituality, he received rabbinical ordination from the Hebrew Union College-Jewish Institute of Religion and holds a PhD from Union Graduate School. A congregational rabbi for twenty years, for the last fifteen he has been writing, leading retreats, co-directing One River Wisdom School, blogging at rabbirami.com, and writing a regular column for Spirituality and Health magazine called "Roadside Assistance for the Spiritual Traveler."
"Inspired and inspiring, thoughtful and thought-provoking, Accidental Grace: Poetry, Prayers, and Psalms is an absorbing and rewarding read from first page to last. An impressive anthology of the thought and poetry of Rabbi Shapiro, Accidental Grace is very highly recommended for anyone seeking spiritual guidance amidst the vicissitudes of daily life in these contemporary times." —Midwest Book Review

"The soul of the Zen Rabbi poet soars. Rami's creative fidelity to the Source is expressed in ways which infuse joy and enlightenment into the reader's experiences of life. Find your essential self in this Accidental Grace." —Sr. Rosemarie Greco, DW, Wisdom House Conference Center, Litchfield, CT

"Rami Shapiro just kills me. First he kills me with laughter, and then he kills me with tears. He kills my fearful, separate, small 's' self with his humor and honesty and humility. Then he invites me into a larger belonging in the big 'S' Self of all-embracing Love." —Gordon Peerman, author of Blessed Relief: What Christians Can Learn from Buddhists about Suffering

"Rami Shapiro is one of the best Jewish spiritual writers. Lush. Profound." —Lawrence Kushner, Emanu-El Scholar at Congregation Emanu-El of San Francisco and author of Kabbalah: A Love Story

"When I read these poems, my heart flutters, seeing the footprints that my Beloved has left for me to follow." —Krishna Das, Hindu Kirtan composer

"How does one speak to a timeless God in contemporary time-centered language? How does one relate to ancient sacred texts containing language and concepts significantly different, and perhaps alien to the modern mindset? This is the starting point for Rami Shapiro’s new book. Shapiro is a gifted 20th/21st century poet whose love of ideas and language pervades his writings. He is also a rabbi who actively wrestles with the complex relationship between God and humans (and even more so that relationship between God and Jews and the Jewish people.) This book divides into three sections: Psalms, Poems and then a short Parable at the conclusion. The psalm section rewrites several of the psalter’s collection, including Psalms 23 and 90. Shapiro expresses much of the essence of the original psalm, yet God is more accessible, less the object of a near-powerless supplicant to an all-powerful deity. The prayers section is patterned on the traditional order of a Jewish prayer service. Yet Shapiro adds his personal touch, universalizing their message. He adds several poems addressing the Holocaust. In one, 'To the Right, to the Left' Shapiro deftly echoes a prominent prayer from the Jewish High Holy Day liturgy, a supplication which suggests that during that time one’s life (or death) is set for the year ahead. His juxtaposition of these items makes the poem both disturbing and challenging. In the Introduction to his work, Shapiro explains that he reads 'traditional [Jewish] texts and becomes furious over how close they come to the truth without ever actually articulating it' (xi). He then takes those words, shreds them, and tosses 'the bits into the air and grabs at those [he] can grasp' and 'ties them into sentences' and offers them back to us as his powerful psalms and poetry (xii). Shapiro terms himself as a 'Zen Rabbi,' and offers an explanation for that description. I still do not understand what a Zen Rabbi is, but I do know this is sacred and special writing." —Rabbi David J. Zucker PhD BCC (retired), North West Surrey Synagogue, Weybridge, Surrey, United Kingdom