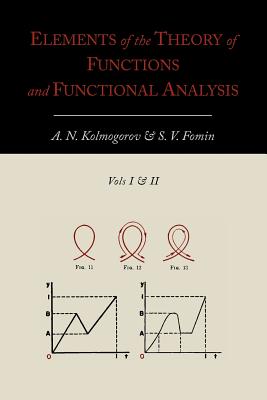 2012 Reprint of Volumes One and Two, 1957-1961. Exact facsimile of the original edition, not reproduced with Optical Recognition Software. A. N. Kolmogorov was a Soviet mathematician, preeminent in the 20th century, who advanced various scientific fields, among them probability theory, topology, logic, turbulence, classical mechanics and computational complexity. Later in life Kolmogorov changed his research interests to the area of turbulence, where his publications beginning in 1941 had a significant influence on the field. In classical mechanics, he is best known for the Kolmogorov-Arnold-Moser theorem. In 1957 he solved a particular interpretation of Hilbert's thirteenth problem (a joint work with his student V. I. Arnold). He was a founder of algorithmic complexity theory, often referred to as Kolmogorov complexity theory, which he began to develop around this time. Based on the authors' courses and lectures, this two-part advanced-level text is now available in a single volume. Topics include metric and normed spaces, continuous curves in metric spaces, measure theory, Lebesque intervals, Hilbert space, and more. Each section contains exercises. Lists of symbols, definitions, and theorems.