The Dharma of Star Wars (Paperback) 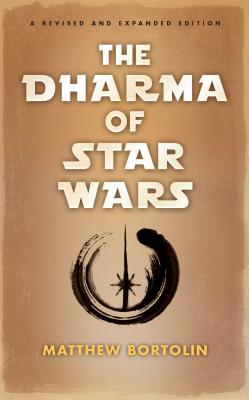 The Dharma of Star Wars (Paperback)


Available in Warehouse. Wait for Email Confirmation for ETA
Is Yoda a Zen Master? Is the story of Luke Skywalker a spiritual epic? The answers, as well as excitement, adventure, and a lot of fun, are here!

This revised and expanded edition of The Dharma of Star Wars uses George Lucas’ beloved modern saga and the wise words of the Buddha to illuminate each other in playful and unexpectedly rewarding ways. Matthew Bortolin writes an inspiring and totally new take on this timeless saga, from A New Hope through Revenge of the Sith and television's Clone Wars. Great fun for any Star Wars fan.

Includes instruction in The Jedi Art of Mindfulness and Concentration and The Padawan Handbook: Zen Contemplations for the Would-Be Jedi.
Matthew Bortolin has camped out for tickets to all the Star Wars movies, and a set of Jedi robes hangs in his closet. He is an ordained member of Thich Nhat Hanh’s Order of Interbeing, and has lived in Buddhist monasteries both in the United States and abroad. He lives in Ventura, California.