Christmas in America: A Photographic Celebration of the Holiday Season (Hardcover) 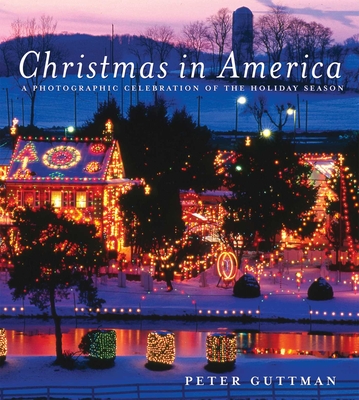 Christmas in America: A Photographic Celebration of the Holiday Season (Hardcover)


This title is likely unavailable. Email or call for price and availability.
Nothing reminds us of the good things in life—family, friendship, food, and good cheer—more than Christmas. With stunning images and illuminating text, award-winning photographer Peter Guttman offers a dazzling overview of the wintry landscapes, traditions, ceremonies, spectacles, and pastimes of the holiday season throughout the United States. Delve into the landscapes and streetscapes of Christmas in America and you can almost smell the frosted scent of snow-covered pines, of chestnuts roasting, and of family meals being shared.

In the East, we find the spirit of the season in a cozy Vermont country inn, or an “army of elves” in a Philadelphia parade, or the sweeping grace of the sugar plum fairies in the Nutcracker Suite. In our heartland, we dogsled through a crystal wilderness in Minnesota, discover blazing bonfires in Louisiana, and explore regal plantations aglow in Mississippi. The snowy cliffs of the Grand Canyon, steam trains weaving high amongst the Rockies, the textured pueblos of New Mexico, the almost heavenly night sky of Utah’s Monument Valley, and the indescribable glazed beauty of Yosemite reflect the West. With these vistas, and more, Peter Guttman captures what is so magical about us and our land. Like the holiday season itself, Christmas in America is a treasure.
Peter Guttman is a photographer, writer, author, TED lecturer, television personality, and adventurer who has traveled on assignment to all seven continents and more than 240 countries. He has won the Lowell Thomas Travel Journalist of the Year three times, been awarded a 2013 Lifetime Achievement Award by the New York Travel Writers Society, and was named Finalist in the international Travel Photographer of the Year competition. He is the author of Extreme Adventure and Children Around the World and is also the creator of the number one bestselling app for the iPad, Beautiful Planet HD. He has been honored with museum exhibitions and solo shows at Sotheby’s and the United Nations, and his work has appeared in Condé Nast Traveler, Geo, Men’s Journal, National Geographic Adventure, the New York Times, and Outside. In 2014, he received the Power of the Image Award in Beijing, China, where he was cited as one of “twenty of the world’s most influential photographers.”