Carmer and Grit, Book One: The Wingsnatchers (Paperback) 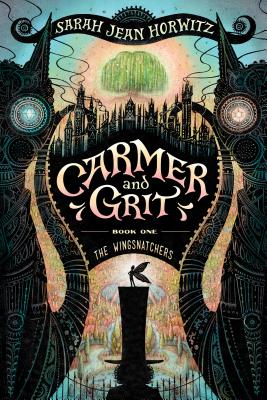 Carmer and Grit, Book One: The Wingsnatchers (Paperback)

This is book number 1 in the Carmer and Grit series.

A stunning debut about a magician’s apprentice and a one-winged princess who must vanquish the mechanical monsters that stalk the streets and threaten the faerie kingdom.

Aspiring inventor and magician’s apprentice Felix Carmer III would rather be tinkering with his latest experiments than sawing girls in half on stage, but with Antoine the Amazifier’s show a tomato’s throw away from going under, Carmer is determined to win the cash prize in the biggest magic competition in Skemantis. When fate throws Carmer across the path of fiery, flightless faerie princess Grit (do not call her Grettifrida), they strike a deal. If Carmer will help Grit investigate a string of faerie disappearances, she’ll use her very real magic to give his mechanical illusions a much-needed boost against the competition. But Carmer and Grit soon discover they’re not the only duo trying to pair magic with machine – and the combination can be deadly.

In this story perfect for readers of the Lockwood & Co and Wildwood series, Sarah Jean Horwitz takes readers on a thrilling journey through a magical wooded fairyland and steampunk streets where terrifying automata cats lurk in the shadows and a mad scientist’s newest mechanical invention might be more menace than miracle.
SARAH JEAN HORWITZ grew up next door to a cemetery and down the street from an abandoned fairy-tale theme park, which probably explains a lot. She currently lives near Boston, MA. Find her on Twitter, @sunshineJHwitz, or at sarahjeanhorwitz.com.
A Spring 2017 Kids’ Indie Next Pick

“From the outstanding cover to the ending ripe for a sequel, Horwitz has much to be proud of with this title, and younger teens in particular will rip through its pages.”
—Locus

“Well-developed characters and a steampunk setting set the stage for this series starter, which is driven by mystery, action, and fairy dust. Incorporating science and danger, this magic-infused adventure carries broad appeal.”
—Booklist

“The main characters have distinct personalities and the plot is original . . . the way technology and magic must both be used to solve the problem will result in thoughtful reader reflection.”
—School Library Journal