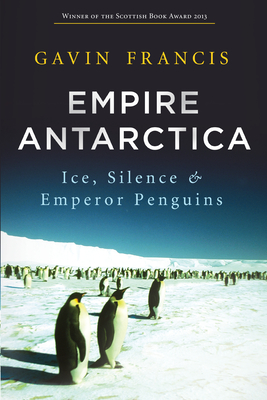 
This title is likely unavailable. Email or call for price and availability.
Gavin Francis fulfilled a lifetime's ambition when he spent fourteen months as the basecamp doctor at Halley, a profoundly isolated British research station on the Caird Coast of Antarctica. So remote, it is said to be easier to evacuate a casualty from the International Space Station than it is to bring someone out of Halley in winter.

Antarctica offered a year of unparalleled silence and solitude, with few distractions and a very little human history, but also a rare opportunity to live among emperor penguins, the only species truly at home in he Antarctic. Following Penguins throughout the year –– from a summer of perpetual sunshine to months of winter darkness –– Gavin Francis explores the world of great beauty conjured from the simplest of elements, the hardship of living at 50 c below zero and the unexpected comfort that the penguin community bring.

Empire Antarctica is the story of one man and his fascination with the world's loneliest continent, as well as the emperor penguins who weather the winter with him. Combining an evocative narrative with a sublime sensitivity to the natural world, this is travel writing at its very best
Gavin Francis was born in 1975 and brought up in Fife, Scotland. After qualifying from medical school in Edinburgh he spent ten years traveling, visiting all seven continents. He has worked in Africa and India, made several trips to the Artic, and crossed Eurasia and Australia by motorcycle. His first book, True North was published in 2008. He has lectured at the Scott Polar Research Institute in Cambridge and the Edinburgh Book Festival, and is a regular speaker at the Royal Scottish Geographical Society. He lives in Edinburgh.
"It is difficult to read this engaging memoir without a smile on one's face, such is the author's enthusiasm for the world's southernmost continent and its endemic penguin species, the Emperor…Francis's descriptions of his visits to this spot, where 60,000 Emperors live in a 'great penguin jamboree,' add moments of sheer joy to this mesmerizing and memorable book."—The Economist

"A highly readable, enjoyable account of one man's year serving as a doctor at Halley Research Station… A keen observer of his surroundings, the author writes vividly of auroras, clouds, stars, sunlight, darkness, ice and snow… A literate, stylish memoir of personal adventure rich in history, geography and science." —Kirkus