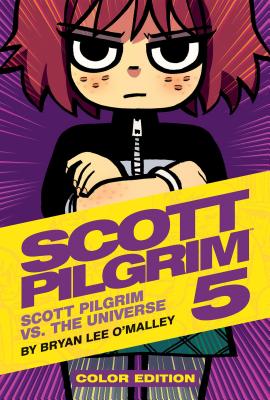 This is book number 5 in the Scott Pilgrim series.

The penultimate SCOTT PILGRIM full-color hardcover edition is here! There are many questions in Scott Pilgrim's terrible little life. First of all, why did he have to turn twenty-four? Secondly, why do robots keep trying to kill him? And why is Sex Bob-omb falling apart? Why is Ramona acting so weird? And finally, why won't these brilliant and deadly Japanese twins leave him alone? Scott Pilgrim will find the answers to these questions... or die trying! Featuring exclusive bonus content and previously unpublished extras you won't find anywhere else in the Universe!
Bryan Lee O'Malley is a Canadian cartoonist best known for the bestselling, award-winning Oni Press series "Scott Pilgrim" (2004-2010). "Scott Pilgrim" was adapted into a critically-acclaimed major motion picture (from Universal) and video game (from Ubisoft) in 2010. O'Malley lives in Los Angeles, where he continues to make comics.