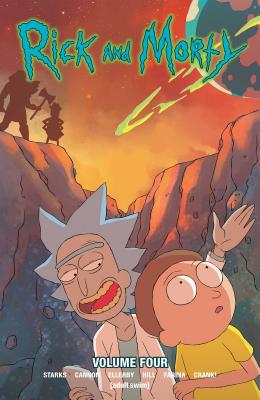 This is book number 4 in the Rick and Morty series.

The hit comic book series based on Dan Harmon and Justin Roiland’s hilarious [Adult Swim] animated show RICK & MORTY continues! Catch up on the adventures of degenerate genius Rick Sanchez and his bumbling grandson Morty as they explore the outer reaches of time, space, and morality. This volume features Eisner award nominated writer Kyle Starks (SEXCASTLE) in collaboration with series artist CJ Cannon in a three-issue story of interplanetary drug rings and star-traveling pickup artists. Also included is "Rick Burn, Dude," drawn by artist Marc Ellerby, in which Rick and Morty take a germaphobic planet by storm, a totally swole one-shot drawn by Kyle Starks, and hilarious backup comics about the whole family!
CJ Cannon is a self-taught artist living in Nashville, Tennessee. When they're not working on comics, outside riding their bike, or drumming, they're almost always in the house drawing fanart.

Marc Ellerby is a comics illustrator living in Essex, UK. He has worked on such titles as Rick and Morty, Doctor Who, Regular Show and The Amazing World of Gumball. His own comics (which you should totally check out!) are Chloe Noonan: Monster Hunter and Ellerbisms. You can read some comics if you like at marcellerby.com.