Secrets of Camp Whatever Vol. 1 (Paperback) 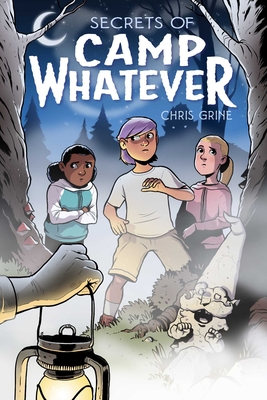 Secrets of Camp Whatever Vol. 1 (Paperback)

This is book number 1 in the Secrets of Camp Whatever series.

"Just the right amount of chills for tweens who enjoy supernatural suspense." — KIRKUS

Perfect for fans of Lumberjanes and Brain Camp, there’s more than mosquitos at Camp Whatever and Willow will need to face truths about herself and her family as summer camp dread goes head to head with the supernatural.

Eleven year-old Willow doesn't want to go to her dad's weird old summer camp any more than she wants her family to move to the weird old town where that camp is located. But her family—and fate itself—seem to have plans of their own. Soon Willow finds herself neck-deep in a confounding mystery involving stolen snacks, suspected vampires, and missing campers, all shrouded in the sinister fog that hides a generation of secrets at Camp ... Whatever it's called.
A graduate of Ringling School of Art & Design and once-upon-a-time greeting card artist, Chris Grine spends most of his time these days writing and illustrating graphic novels. He is the creator of the Eisner-nominated series Chickenhare, as well as Time Shifters, and Secrets of Camp Whatever. Other titles Chris has worked on include The Witch Finder General, Alien Bones, as well as adapting the Animorphs book series into graphic novels.

Chris lives with his wife and kids and spends most of his time being tired and drinking coffee in an attempt to not be so tired.
"Just the right amount of chills for tweens who enjoy supernatural suspense."
— Kirkus

"A cute and creepy comic ideal for middle-graders hungry for breezy scares."
— Booklist

"Sure to be a hit with young readers, especially fans of the Lumberjanes books and the TV series Gravity Falls. The conclusion hints that more magical adventures await Willow and her friends, which makes this new series one to invest in."
— School Library Journal