Rick and Morty Ever After Vol. 1 (Paperback) 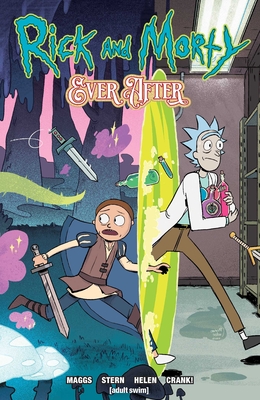 Rick and Morty Ever After Vol. 1 (Paperback)


This title is likely unavailable. Email or call for price and availability.
Rick and Morty enter a world most grim...a world of fairy tales!

When Morty has to cram for a test, Rick suggests using his latest invention to absorb all of the knowledge he needs from his textbook Avalonia: Bad Stories for Bad Children. Things go wonderfully wrong when RIck and Morty are both pulled into the universe contained within the book, setting off on an adventure through a twisted mirror version of Grimm's Fairy Tales.

Collecting the hit mini-series Rick and Morty Ever After 1-4.
Sam Maggs is a bestselling author of books, comics, and video games. She’s the author of many YA and middle-grade books like The Unstoppable Wasp: Built on Hope, Con Quest!, Tell No Tales, and The Fangirl’s Guide to the Galaxy; a senior games writer, including work on Marvel’s Spider-Man; and a comics writer for titles like Marvel Action: Captain Marvel, My Little Pony, and Transformers. She is also an on-air host for networks like Nerdist. A Canadian in Los Angeles, she misses Coffee Crisp and bagged milk. Visit her online at sammaggs.com or @SamMaggs!

Sarah Stern is a comic artist and colorist from New York. Find her at sarahstern.com or follow her on twitter at @worstwizard.

In between stints as a RICK AND MORTY cover artist, Emmett Helen has created short works for SWEATY PALMS, the LIFE FINDS A WAY anthology, DRAW OUT THE VOTE, and THE BEAUTIFUL BOOK OF EXQUISITE CORPSES. They spend hours in the kitchen and miss the beach just terribly. MY RIOT is their debut graphic novel.