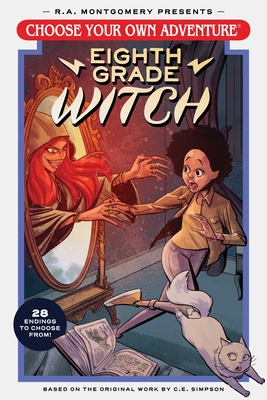 
On Our Shelves as of 9am Today
The first official Choose Your Own Adventure graphic novel!

From the hit Choose Your Own Adventure® novels comes a newly adapted graphic novel taking readers on their own visual adventure! Enter a ghoulish world of nightmares, witches, ghosts, and dreaded the eighth grade as Rabbit, the new kid on the block! As Rabbit, readers will get to choose which adventure--or nightmare--they'll embark on. From learning about the mysterious witch Prudence Deadly, to trouncing through spooky graveyards, to meeting ghostly ancestors or channeling some witchcraft with classmates, no one path leads to the same destination.

Will you choose a path that leads to the light? Or will the path you choose lead to a gruesome end? You get to decide!
An Ennie Award-winning game writer, creative director, and sci-fi author with twenty years of industry experience, Andrew E.C. Gaska is also the Senior Development Editor and Head Writer for Lion Forge Animation. In addition to developing STEAM education projects, Andrew has adapted two classic Choose Your Own Adventure books to graphic novel form. He is a freelance consultant to 20th Century Fox, maintaining continuity and canon bibles for Predator and Planet of the Apes. The lead writer of the ALIEN Role Playing Game, he lives beneath a pile of action figures with his glutenous feline, Adrien.

E.L. Thomas is a writer and game designer who has worked on numerous treatments, story bibles, and scripts for animation. His most recent credits include adapting Choose Your Own Adventure titles into graphic novels and co-writing the pilot for the Organauts animated series. He is the co-creator of the gaming periodical Rolled & Told. His additional game credits include working on supplements for the Aliens RPG. He lives in the midwestern United States with his comely wife and three spoiled dogs.

Valerio Chiola is an Italian comic book artist lives in Rome. He is co-created and illustrator of Bulloni, a children’s books serie published by Round Robin Editrice in Italy and Carambuco Ediciones in Spain (with the title El Tuerca). He has also collaborated with Italian Edizioni Erickson and Abc Mouse.com.

Char Simpson (they/them) is a non-binary artist, interactive writer, creative producer, and teacher. They specialize in the crafting and mapping of compelling immersive stories. Their work has been featured by the Tribeca Film Festival, Cannes XR, DEFCON, and others. They work in the space between comedy and horror, even when it gets really scary, there is still a flicker of fun. Find out more at charsimp.com.