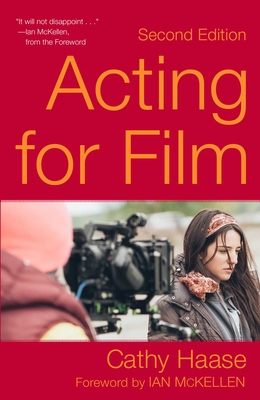 
This title is likely unavailable. Email or call for price and availability.
"It will not disappoint . . ." —Ian McKellen, from the Foreword

An Authoritative Training Manual for Film Actors and Teachers

“In today's entertainment industry of buff bodies and beautiful faces, it's easy to think that a couple of sit-ups and high cheek bones can create a movie legend,” writes film veteran Cathy Haase. However, she adds, what the actor really must have are “technique, craft, and a depth of self-knowledge.” In Acting for Film, Second Edition, Haase shows actors how to develop all of these, sharing her secrets (developed through years of on-camera work) for creating characters who come alive and who touch the souls of the audience.

Readers will learn how to apply theatrical training to film acting and hone a personal approach to rendering a character. Acting for Film, Second Edition, is an essential guide for aspiring performers, acting teachers, and anyone interested in gaining a greater understanding of the craft. This new edition includes: For any performer who intends to make a living in front of the camera, Acting for Film, Second Edition, is the most authoritative resource! With Haase’s experience and advice in their pocket, readers will be prepared to land the film role they’ve been dreaming of.
Cathy Haase has been acting professionally for over 30 years. A faculty member at the School of Visual Arts and a workshop leader for the Actors Studio, she lives in New York City.

Ian McKellen is an Academy Award®-nominated actor and the recipient of six Laurence Olivier Awards, a Tony Award, a Golden Globe Award, a Screen Actors Guild Award, and a British Independent Film award, among many others, during his more than half a century on stage and screen. He is beloved by fans worldwide as Magneto in the X-Men films and Gandalf in The Lord of the Rings and The Hobbit trilogies. He resides in London, England.
“Cathy Haase’s acting class and the exercises in her book took me from thirty years in the background to fifteen in the forefront of a successful music career. The techniques she taught me make my performances confident and emotionally engaging.” —Kid Congo Powers, musician and performer, The Gun Club, The Cramps, Nick Cave and the Bad Seeds, and Kid Congo & The Pink Monkey Birds

“Cathy's valuable experience, not only as an actress but also as a long-time acting teacher, flows into this tangible and inspiring book!” —Christian Wagner, director, producer (The Limits of Patience), and professor for directing, script development, and screen acting at Filmakademie Baden-Württemberg

“Cathy Haase is an exceptionally gifted teacher. This precious toolbox, gifted to the actor building a process for themselves, never once mystifies the physical and intuitive practice of the performer, mainly because it is focused on real exercises and daily routines that work. Cathy generously makes this art everybody’s business, and her sharp insights deserve the attention of directors, writers, and other film professionals. This group already gains a huge amount from her classes around the world. All filmmakers should feel the ordinary realities of an actor’s work from the inside if they expect to somehow collaborate, play and excel in tune.” —Ben Gibson, director of the German Film and Television Academy, Berlin; visiting professor of Film, Goldsmiths University, London; and producer

“As a talent agent, this is an essential book that I recommend all my actors read. Cathy gives you the tools you need from relaxing to developing a character to professionally conducting yourself on set. Simply amazing!” —Michele Peacock, talent agent, Andreadis Talent Agency

“The second edition of Acting for Film remains a treasured map for those navigating the journey towards working fully—as artists and professionals on set—in the exciting and rigorous landscape of filmmaking.” —Kathleen Potts, Ph.D., assistant professor in theatre, the City College of New York and coauthor of The Professional Actor’s Handbook