Unjust: Social Justice and the Unmaking of America (Hardcover) 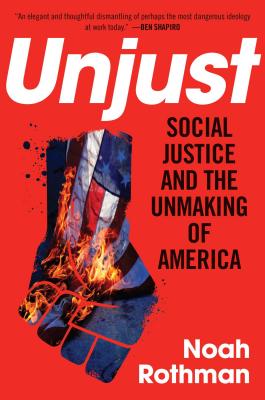 Unjust: Social Justice and the Unmaking of America (Hardcover)


Available in Warehouse. Wait for Email Confirmation for ETA
"An elegant and thoughtful dismantling of perhaps the most dangerous ideology at work today." — BEN SHAPIRO, bestselling author and host of "The Ben Shapiro Show"

"Reading Noah Rothman is like a workout for your brain." — DANA PERINO, bestselling author and former press secretary to President George W. Bush

There are just two problems with “social justice”: it’s not social and it’s not just. Rather, it is a toxic ideology that encourages division, anger, and vengeance. In this penetrating work, Commentary editor and MSNBC contributor Noah Rothman uncovers the real motives behind the social justice movement and explains why, despite its occasionally ludicrous public face, it is a threat to be taken seriously.

American political parties were once defined by their ideals. That idealism, however, is now imperiled by an obsession with the demographic categories of race, sex, ethnicity, and sexual orientation, which supposedly constitute a person’s “identity.” As interest groups defined by identity alone command the comprehensive allegiance of their members, ordinary politics gives way to “Identitarian” warfare, each group looking for payback and convinced that if it is to rise, another group must fall.

In a society governed by “social justice,” the most coveted status is victimhood, which people will go to absurd lengths to attain. But the real victims in such a regime are blind justice—the standard of impartiality that we once took for granted—and free speech. These hallmarks of American liberty, already gravely compromised in universities, corporations, and the media, are under attack in our legal and political systems.
Noah Rothman is an Associate Editor of Commentary Magazine. He lives in New York City.
“An elegant and thoughtful dismantling of perhaps the most dangerous ideology at work today. Modern social justice thinking tears away at our most cherished ideals and institutions. Noah Rothman has done a tremendous service in cutting through the sloganeering and getting to the heart of the matter—the elevation of crude identity politics at the expense of decency, merit, and truth.”
— Ben Shapiro

“Reading Noah Rothman is like a workout for your brain, and this book also tugs at your heart. Noah calls upon all of us to remember our common identity first—we are Americans. He suggests we start acting like it.”
— Dana Perino

“Noah Rothman makes it clear that Americans have just two choices before them. They can fulfill the beautiful principles that were outlined in the Declaration of Independence and were then extended by those who fought for the right to their ‘promissory note,’ or they can descend into grievance-mongering, identity politics, and sectarian strife.”
— Charles C. W. Cooke

“Identity politics is corrupting the American ideal of e pluribus unum. ‘Out of many, one’ has been replaced by ‘from one into many.’ In this robust endorsement of our nation’s timeless founding principles, Noah Rothman says the things that need to be said but that too few people have the courage to say.”
— James Kirchick

“Noah Rothman examines a movement more focused on political retribution than the search for justice, explaining with great insight how has poisoned our politics, coarsened our culture, and turned us into a nation of victims.”
— Joe Scarborough

“Noah Rothman’s pointed, eloquent, powerful, and necessary Unjust marks the distinguished beginning of a what will surely be a remarkable career as an author of books.”
— John Podhoretz

“Noah Rothman’s first book (of many, I hope) shows how social justice ideologues, left and right, are rejecting the uniquely anti-tribal nature of the American experiment that has allowed us to rise above the tit-for-tat tribal temptation that has marked—and wrecked—so many past civilizations.”
— Jonah Goldberg