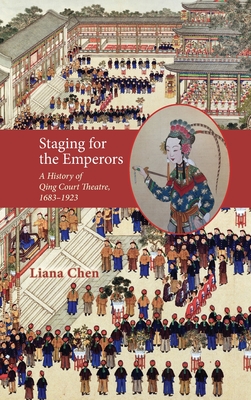 Theatrical performance occupied a central place in the emotional and political life of the Qing dynasty imperial household. For over two centuries, the Qing court poured a tremendous amount of human and material resources into institutionalizing the theatrical arts for the purposes of entertainment and edification. The emperors and empresses were ardent patrons and key players in establishing an artistic form that the court theatre called its own. They went to great lengths to cultivate a discerning taste in theatre and oversaw the artistic and managerial aspects of court theatrical activities. In the imperial theatrical spaces within and outside the Forbidden City, which were designed and built with the capacity to produce stunning visual effects, theatrical productions were staged to entertain imperial family members and to impress obeisance-paying guests from near and afar.

Much scholarly attention has been devoted to understanding the dynamics between the Qing-dynasty court theatre and the burgeoning popular theatrical traditions outside the court. However, the insights drawn from recent studies have only begun to be applied to the analysis of dramas commissioned by the Qing court for various ceremonial occasions. Treating Qing-dynasty court theatre as a unique site in which to examine important but uncharted realms of Chinese theatrical experience, Staging for the Emperors examines two distinct and interlocking dimensions of the Qing-dynasty court theatre-the vicissitudes of the palace troupe and the multifaceted functions of court-commissioned ceremonial dramas-to highlight the diverse array of views held by individual rulers as they used theatrical means to promote their personal and political agendas. Drawing on recently discovered materials from a variety of court administrative bureaus, memoirs, diaries, and play scripts written for court ceremonial occasions, this study places the history of Qing-dynasty court theatre in the broader context of Qing cultural and political history. It demonstrates that theatre, like other forms of courtly art, served the individual rulers' desire to embody virtue, to entertain at leisure, and to project aspirations.

Staging for the Emperors would appeal to readers interested in China studies and performance studies. It would also appeal to those outside the field of China studies who are interested in developing a cross-cultural perspective on the interplay between state rituals, power, identity formation, and theatrical experiences.

This book is in the Cambria Sinophone World Series headed by Victor H. Mair (University of Pennsylvania) and includes color images.