Historic Homes of Bastrop, Texas (Sara and John Lindsey Series in the Arts and Humanities #23) (Hardcover) 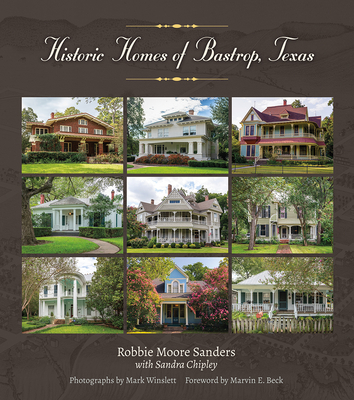 Historic Homes of Bastrop, Texas (Sara and John Lindsey Series in the Arts and Humanities #23) (Hardcover)

Bastrop, Texas: a picturesque community of modest size located at the edge of the Lost Pines Forest in Central Texas. Yet, from its vantage point on the banks of the Colorado River, this town boasts 131 sites listed in the National Register of Historic Places, qualifying the community for its label: “Most Historic Small Town in Texas.”

In Historic Homes of Bastrop, Texas, local historian and researcher Robbie Moore Sanders has collected the stories behind nearly a hundred of the city’s most historic dwellings, most built between 1835 and 1950. Copiously illustrated and engaging, the book begins with a quick historical overview of the community that incorporates period photographs, historic floorplans and maps, and engaging stories about the people who built and lived in the homes. In addition, Sanders has provided beautiful, full-color photographs of the buildings as they exist today.

From the simple dwelling of a community activist to the ornate Victorian mansions of the wealthy, Sanders traces the narrative of this culturally rich community through the remarkably varied lives of its people and the houses they built. Readers with an interest in local history and culture and historic preservation as well as visitors to this popular tourist locale—recognized as a “Distinctive Destination” by the National Trust for Historic Preservation—will thoroughly enjoy Historic Homes of Bastrop, Texas.

ROBBIE MOORE SANDERS recently retired after serving for fifteen years as trustee of the Bastrop County Historical Society. An avid researcher of local history, she has applied for and received three Texas Historic Landmark designations for various properties in Bastrop. SANDRA CHIPLEY has been a licensed landscape architect for 33 years. Previously employed by the City of Fort Worth and as the Park Development Coordinator for the City of Austin, she has been with the Texas Department of Transportation since 2011, currently in the landscape architecture section of the design division.

"Ever since I was a little girl, I have always loved hearing the stories of my Texas ancestors from my Dad. Robbie has captured the rich history of Bastrop in a beautiful, extensive way.  It is such an honor that our family plays even a small part in the shaping of this great state."—Haylie Duff
— Haylie Duff

“Historic Homes of Bastrop recounts not just how and when Bastrop’s most notable homes were constructed and modified, but gives fascinating vignettes about the families who lived in them through the decades. While scrupulously separating verifiable fact from mere legend, the authors preserve rich local lore about the owners and their families.  Their stories reflect the events that have shaped the City—from lumbering of cypress and pine, coal mining, historic floods, the Spanish Flu, World War II’s Camp Swift, the 1862 and 2011 fires, to 21st century suburbanization.  Through this rich mix, the authors’ story will interest not only those who are acquainted with this single historic town, or even those who want to study the development and subsequent preservation of nineteenth century architecture, but anyone who wants to understand the rich fabric of small-town American life.”—Thomas R. Phillips, former Chief Justice of the Texas Supreme Court
— Thomas R. Phillips

“Robbie Sanders has dedicated decades to the study of the history of houses and buildings in Bastrop, Texas. Her perseverance and passion for this subject has produced an excellent volume chronicling structures in a town that has, from the days of its Revolution, served as a micro of Texas itself.”—Kenneth Kesselus, former mayor of Bastrop
— Kenneth Kesselus

“The photographs beautifully illustrate Bastrop’s remarkable collection of architecturally significant historic homes.  What makes this book even more notable are the people and stories that bring the homes and the way of life in Bastrop alive.”—Carol Shull, former Keeper of the National Register of Historic Places
— Carol Shull