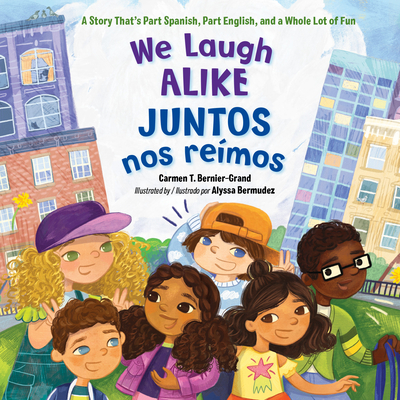 
Available in Warehouse. Wait for Email Confirmation for ETA
Six kids are ready to play: three speak English. Y tres hablan español [and three speak Spanish]. But all of them laugh alike and together! This clever playground adventure weaves together bilingual Spanish and English conversations, so two groups of children can express similar thoughts in their own languages.

A brand new barrier-breaking and friendship-affirming bilingual picture book from award-winning author Carmen T. Bernier-Grand (Diego: Bigger than Life). Three kids are playing at the park when three more arrive. The groups can't understand each other because one trio speaks only English and the other only Spanish. But they can express similar thoughts in their own languages. Aquí interactúan el inglés y el español. Can they find a way to play? Of course they can! By watching each other, both groups learn that they are more alike than different and end up discovering new words and making new friends in this adventure propelled by clever integrated Spanish dialogue.
Carmen T. Bernier-Grand is the author of numerous books for children, including Picasso: I The King, Yo el rey; Alicia Alonso: Prima Ballerina; and Diego: Bigger than Life, a Pura Belpré honor book. She speaks about her work and the history of Puerto Rico, where she grew up, to elementary students. She lives in Portland, Oregon.

Alyssa Bermudez has illustrated several books for children, including the two Lucía Luchadora books, the Amelia Chamelia series, and My Singing Nana. She studied illustration and animation at the Fashion Institute of Technology. Alyssa was born and raised in New York City, she has Puerto Rican family roots, and she currently lives in Tasmania, Australia. www.alyssabermudezart.com
Two groups of friends, one that speaks English, the other speaking Spanish, encounter each other at the park and learn to communicate through the language of play.
The two languages are reflected in a responsive dual text, though not an exact translation, that allows readers to engage with each group’s thinking and understanding. “We listen to the other kids, even though we don’t understand a word of Spanish. / Escuchamos a los tres niños, aunque no sabemos inglés.” The literal translations are: “Escuchamos a los otros niños, a pesar de no entender una palabra de español. / We listen to the three children, even though we don’t know English.” The two groups—both racially diverse—cautiously observe each other and then each begins to learn the other’s games until they are counting, jumping rope, dancing, singing, and playing together. The cheery art using scanned textures and bold colors highlights the activity, setting it in a city park in the shadow of numerous skyscrapers. The simple, dual text works well to establish the concept that these children have much in common. But the wording of the English title, We Laugh Alike, is awkward in comparison to the Spanish version, which translates as Together We Laugh and jibes better with the spirit of the story. Nevertheless, the children are alike in their eagerness to befriend one another and laugh together.
A sweet demonstration of how friendship can transcend language barriers.
—Kirkus Reviews


In this playful spin on the bilingual format, three English-speaking friends go to play at the park, where a Spanish-speaking trio soon shows up. Each group is curious about the other, but for the first half of the story, they keep to different sides of the park, saying the same things in their respective languages, thus naturally incorporating the translation into the text. For example, when the English-speaking kids say, “They know how to jump rope! But we don’t understand their rhyme,” the Spanish-speaking kids also say, “Nuestro rima los invita a saltar con nosotros, pero no now hacen caso.” Before long, kids from both groups are gesturing to one another to come play, bringing everyone together. Colorful illustrations showcase the similarities among the racially diverse kids, who easily find ways to connect that go beyond language. Yet, the kids don’t stop there; they spend time learning each other’s songs and rhymes. A glossary and author’s note rounds out this encouraging demonstration of overcoming language barriers.
—Booklist