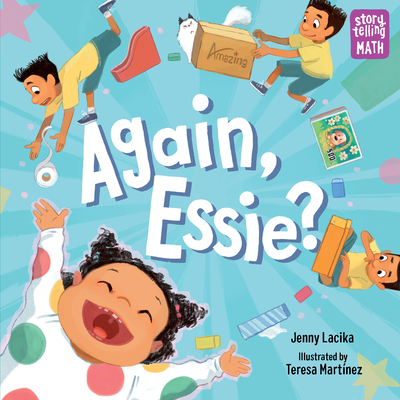 
Available in Warehouse. Wait for Email Confirmation for ETA
Celebrate diversity, math, and the power of storytelling!

Rafael wants to protect his toys from his little sister, Essie. Gathering materials from around the house, he builds a wall tall enough and wide enough to keep her out. But will it be strong enough? And what does Essie really want? A playful exploration of physical space and geometry, featuring Chicanx (Mexican American) characters and a glossary of Spanish words.

Storytelling Math celebrates children using math in their daily adventures as they play, build, and discover the world around them. Joyful stories and hands-on activities make it easy for kids and their grown-ups to explore everyday math together. Developed in collaboration with math experts at STEM education nonprofit TERC, under a grant from the Heising-Simons Foundation.
Jenny Lacika grew up in Santa Fe, New Mexico, where she learned to work together with an older brother and a younger brother. She graduated from MIT after she discovered how math could break down walls and open doors, and she never stopped loving books. She now lives in her hometown with her husband and two kids. This is her first book.


When Teresa Martínez was a child, her family moved from a small town to the city. Drawing helped shy Teresa connect with the other kids at school. Now she connects with children across Mexico and around the world through the books she illustrates. www.teresa-mtz.com
Rafael wants to keep his toys safe from his rambunctious toddler sister, Essie. What can he do?
Nothing seems to ward off the human tornado that is his little sister. Blocking the doorway with a “no pasar” sign was a bust—Essie can’t read! Maybe he can protect his toys with a barricade. Commandeering an array of household items, Rafael begins constructing “un muro. A wall.” Puzzle boxes, cereal boxes, packing boxes, a portable cooler, and even a roll of toilet paper are pressed into service. Building the wall is not as easy as he thought. Using spatial relations and problem-solving skills, Rafael successfully constructs an impassable and kid-proof obstacle to protect his toys—or has he? Before he knows it, the irrepressible Essie barrels through the wall, and Rafael finally realizes what his sister has been trying to do—it’s not his toys she wants to play with but him. Lacika’s STEM-driven story highlights early math skills, self-directed creative play, and the power of collaboration. Using simple declarative sentences with a peppering of Spanish vocabulary, the text unfolds Rafael’s dilemma organically. The bright, full-color digital illustrations show various adults going about their daily routines oblivious to the churning sibling undercurrents in their Chicanx middle-class household. A Spanish glossary and math activities are included.
A fun look at spatial and sibling relationships.
—Kirkus Reviews

From a series that weaves strong cultural connections and math concepts into a whole, this book features Rafael, who needs to protect his toys from his adorable but annoying baby sister, Essie. During ­Essie’s nap, he gathers materials to build a barrier to keep her from destroying his things. He carefully considers the size and shape of each item, and how it will work in his design scheme. Plenty of Spanish words in the story connect to Rafael’s culture, but his problem with his little sister is universal. At the end of the story, he finds that it’s more fun to include Essie than to keep her out. Most children will relate to this amiable story that limits the math concepts to building with three-dimensional shapes. Without the specific geometric nomenclature to help with build vocabulary, that part of the plot is weak, but the story gets by on its charms. VERDICT A compelling story with connections to math, Latinx culture, and family dynamics; a lot of kids will identify with Rafael and be happy to see this book on the shelves.
—School Library Journal

Rafael’s baby sister, Essie, is a toddling terror who doesn’t understand boundaries and keeps grabbing all of his toys. So, Rafael decides to build a wall to protect his belongings. He uses shoeboxes, paper rolls, magazine holders, and other found objects. Through trial and error mixed with a grasp of 3-D geometry and spatial reasoning, Rafael builds his fortification. But is it Essie-proof? This question is answered as soon as naptime ends and Essie comes busting through the wall. The toys, however, are safe because Essie loves knocking down the wall—and playing with her big brother—most of all. Lacika and Martinez do a wonderful job in this Storytelling Math title of bringing a STEM topic to life, and the illustrations clearly depict Rafael’s thoughts and building process. Because Rafael’s family is Chicanx (Mexican American), the text smoothly incorporates Spanish vocabulary, which is defined in a glossary. The back matter also includes an “Exploring the Math’’ section featuring math notes, activities, and a link to additional STEM support material.
—Booklist