Redefining Science: Scientists, the National Security State, and Nuclear Weapons in Cold War America (Culture and Politics in the Cold War and Beyond) (Paperback) 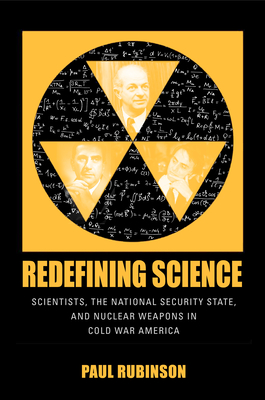 Redefining Science: Scientists, the National Security State, and Nuclear Weapons in Cold War America (Culture and Politics in the Cold War and Beyond) (Paperback)


This title is likely unavailable. Email or call for price and availability.
The Cold War forced scientists to reconcile their values of internationalism and objectivity with the increasingly militaristic uses of scientific knowledge. For decades, antinuclear scientists pursued nuclear disarmament in a variety of ways, from grassroots activism to transnational diplomacy and government science advising. The U.S. government ultimately withstood these efforts, redefining science as a strictly technical endeavor that enhanced national security and deeming science that challenged nuclear weapons on moral grounds "emotional" and patently unscientific. In response, many activist scientists restricted themselves to purely technical arguments for arms control. When antinuclear protest erupted in the 1980s, grassroots activists had moved beyond scientific and technical arguments for disarmament. Grounding their stance in the idea that nuclear weapons were immoral, they used the "emotional" arguments that most scientists had abandoned.

Redefining Science shows that the government achieved its Cold War "consensus" only by active opposition to powerful dissenters and helps explain the current and uneasy relationship between scientists, the public, and government in debates over issues such as security, energy, and climate change.
Paul Rubinson is assistant professor of history at Bridgewater State University.
"Through a series of well-chosen case studies, Rubinson puts a very human face on the scientists who shaped debates over the very nature of humanity in the nuclear age."—Edwin A. Martini, author of Agent Orange: History, Science, and the Politics of Uncertainty

"Rubinson offers an illuminating depiction of the efforts of scientists to influence the potentially existential debates surrounding the development and use of nuclear weapons. In so doing, he insightfully analyzes the ways the national security state either co-opts, marginalizes, or discredits scientists who are potential critics of the government's use of science and technology to pursue global hegemony."—Peter Kuznick, author of Beyond the Laboratory: Scientists as Political Activists in 1930s America

"The case it makes is compelling. Redefining Science will be of considerable interest to historians of twentieth-century science, as well as to those with more specialized interests in policy history."—Isis: A Journal of the History of Science

"Redefining Science prompts readers to ponder important questions about the risks of ideological conformity and the many factors affecting perceptions of scientific credibility."—Journal of American History