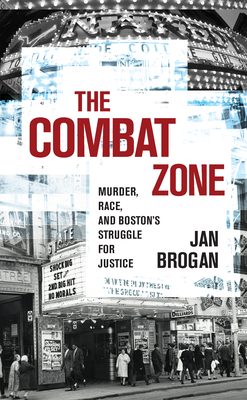 
This title is likely unavailable. Email or call for price and availability.
Shortlisted for the 2021 Agatha Award for Best Non-Fiction and the 2022 Anthony Award for Best Critical or Nonfiction Work

At the end of the 1976 football season, more than forty Harvard athletes went to Boston's Combat Zone to celebrate. In the city's adult entertainment district, drugs and prostitution ran rampant, violent crime was commonplace, and corrupt police turned the other way. At the end of the night, Italian American star athlete Andy Puopolo, raised in the city's North End, was murdered in a stabbing. Three African American men were accused of the crime. His murder made national news and led to the eventual demise of the city's red-light district.

Starting with this brutal murder, The Combat Zone tells the story of the Puopolo family's struggle with both a devastating loss and a criminal justice system that produced two trials with opposing verdicts, all within the context of a racially divided Boston. Brogan traces the contentious relationship between Boston’s segregated neighborhoods during the busing crisis; shines a light on a court system that allowed lawyers to strike potential jurors based purely on their racial or ethnic identity; and lays bare the deep-seated corruption within the police department and throughout the Combat Zone. What emerges is a fascinating snapshot of the city at a transitional moment in its recent past.
JAN BROGAN is a journalist and novelist living in Boston. A former staff writer for the Providence Journal and the Worcester Telegram, her freelance work has appeared in the Boston Globe, Boston magazine, Ladies' Home Journal, and Forbes.
“A great strength of Brogan’s book is the broad context that she provides—one of overlapping divisions of race, class, and geography—to make sense of how the legal proceedings unfolded . . . Brogan writes with empathy for all involved in the events she so capably explores.”—DigBoston

"Brogan's background as a journalist shows in her careful reporting and historical context . . . The grim history of racism in Boston, the crime and corruption of the Combat Zone, and the legal permutations of the case take up the bulk of the book. But its heart lies in a character who wasn't even in the Combat Zone that fateful night—the victim's brother, Danny Puopolo."—Providence Journal

"Brogan's work brings us into heart-wrenching, jaw-dropping contact with the reality of the crime and its times. It's the best form of narrative nonfiction, in that it covers race, class, busing, criminal justice reform and courtroom drama, but never strays far from the emotional reality of the case for both victims and defendants."—State House News Service

"The careful, meticulous research, the compassionate yet balanced tone, and the compelling narrative thrust make this book read almost like a legal or crime thriller. Brogan does a superb job in untangling this complex case."—Stephanie Schorow, author of Inside the Combat Zone: The Stripped Down Story of Boston's Most Notorious Neighborhood

"The Combat Zone effectively moves forward the conversation on race, highlighting the tumultuous time of busing in Boston and the racial strife that it caused, the conditions of minorities that were forced by circumstance to seek a livelihood in the Combat Zone, and how the media covered Black murder victims differently than white murder victims.”—Christopher Daley, author of Murder and Mayhem in Boston: Historic Crimes in the Hub