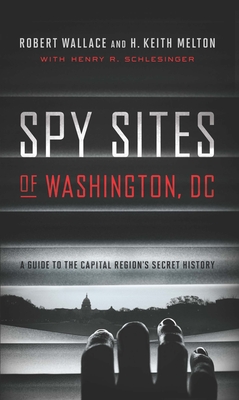 Washington, DC, stands at the epicenter of world espionage. Mapping this history from the halls of government to tranquil suburban neighborhoods reveals scoresof dead drops, covert meeting places, and secret facilities--a constellation ofclandestine sites unknown to even the most avid history buffs. Until now.

Spy Sites of Washington, DC traces more than two centuries of secret history from the Mount Vernon study of spymaster George Washington to the Cleveland Park apartment of the "Queen of Cuba." In 220 main entries as well as listings for dozens more spy sites, intelligence historians Robert Wallace and H. Keith Melton weave incredible true stories of derring-do and double-crosses that put even the best spy fiction to shame. Maps and more than three hundred photos allow readers to follow in the winding footsteps of moles and sleuths, trace the covert operations that influenced wars hot and cold, and understand the tradecraft traitors and spies alike used in the do-or-die chess games that have changed the course of history.

Informing and entertaining, Spy Sites of Washington, DC is the comprehensive guidebook to the shadow history of our nation's capital.

Robert Wallace is the former director of the Central Intelligence Agency's Office of Technical Service. He and H. Keith Melton have co-authored four books, including Spycraft: The Secret History of the CIA's Spytechs, from Communism to Al-Qaeda, The Official CIA Manual of Trickery and Deception, Spy Sites of New York City, and Spy Sites of Philadelphia.H. Keith Melton is an intelligence historian and author of several books, including Ultimate Spy: Inside the Secret World of Espionage. He owns one of the largest collections of spy paraphernalia in the world.Henry R. Schlesinger is a New York-based writer who has collaborated previously with the authors on Spyycraft, Spy Sites of Philadelphia and Spy Sites of New York City.