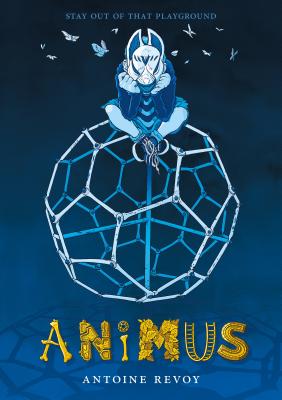 The residents of a quiet Japanese neighborhood have slowly come to realize that inauspicious, paranormal forces are at play in the most unlikely of places: the local playground. Two friends, a young boy and girl, resolve to exorcise the evil that inhabit it, including a snaggle-toothed monster.

In Animus, a beautiful but spooky young adult graphic novel of everyday hauntings, Antoine Revoy delivers an eerie tale inspired by the Japanese and French comics of his childhood.

Writer/Illustrator Antoine Revoy has a long-held passion for all forms of comics—graphic novels, manga and bandes dessinées—fostered by his childhood living in Paris, France and Tokyo, Japan. Antoine's clients include Der Spiegel and New York Times, and his work has received acclaim by the Society of Illustrators, American Illustration, and Spectrum. Antoine currently teaches at the Rhode Island School of Design. He lives in Providence, RI, with his wife, illustrator Kelly Murphy.

"Revoy’s otherworldly adventure moves quickly, but his succinct storytelling keeps readers on track with essential details. Both the contemporary and historical elements of the story’s setting come to life in the manga-style art." —Publishers Weekly

"The narrative and illustrations work together seamlessly to create mysteries that are baffling yet intriguing. An eerie graphic novel mystery that is bewildering and unnerving in the best way possible."—Kirkus

"The child protagonists are captivating, and they will entice young readers eager to unravel the mysteries of the playground’s supernatural tendencies."—Booklist

“Antoine Revoy's ANIMUS evokes memories of Otomo's DOMU, with its beautiful drawings, keen sense of place, and air of mystery, filled with both menace and wonder. Depicting the small moments of Hisao and Sayuri's friendship, and the surreal and supernatural with equal adroitness, Revoy brings the reader along on a fantastical yet intimate journey filled with light and darkness.” —Sonny Liew Eisner award-winning author of The Art of Charlie Chan Hock Chye

“At once a haunting love letter to Japanese comics and a deliciously creepy mystery, ANIMUS is a stunning debut novel.” —LeUyen Pham Award-winning illustrator of Real Friends, The Princess in Black

“Unsettling, weird and beautiful as only fairy tales can be.” —Alex Puvilland New York Times-best selling artist of Spill Zone