Castle in the Stars: The Moon-King (Hardcover) 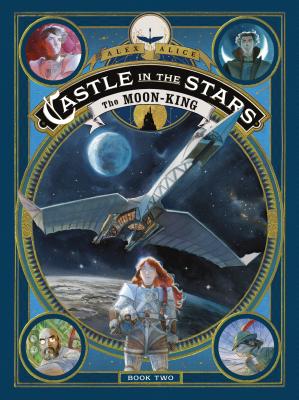 Castle in the Stars: The Moon-King (Hardcover)

What if man journeyed into space in 1869, not 1969? In The Moon-King, the second volume in this breath-taking fantasy graphic novel series, Alex Alice draws on Jules Verne and nineteenth-century romanticism to create a watercolor world of adventure and wonder to enchant adults and younger readers alike.

In anticipation of their maiden voyage, Seraphin and the Knights of Aether had prepared for everything—except treason. The villainous chamberlain wants to overthrow King Ludwig and claim the electro-aetheric technology for Prussia. The only escape for the king and his companions lies in the frosty skies above Bavaria.

The aethership’s first flight is a success, but their respite is short-lived. As long as the chamberlain is free to spread his lies, these travelers will find no safe harbor. To save the king’s throne, they must push the ship even farther—out of the sky . . . and into the stars!

Alex Alice is a French graphic novel writer and artist, working in France and sometimes the U.S. Born in 1974, he grew up in the south of France and had the chance to travel around Europe, where he developed a life-long passion for the ruins and castles of the medieval and romantic ages.

This infused his art, from the grim medieval setting of esoteric thriller “The Third Testament” (1997-2003, co-written with Xavier Dorison) to the primeval, mythic world of “Siegfried” (2007-2011), an operatic re-telling of the northern saga of the great dragon-slayer.

In Castle in the Stars, he draws on Jules Verne and nineteenth century romanticism to create a watercolor world of adventure and wonder, to enchant adults and younger readers alike. His works have been translated in more than 15 languages.

"Alice's soft outlining and a blended watercolor approach make the illustrations appear dreamlike and surreal, perfectly matching the tone of the piece, while his anime-style facial expressions and action sequences modernize the old-fashioned appearance of the machines and locales. A whimsical choice for high-fantasy lovers." —Booklist