The Road Out of Hell: Sanford Clark and the True Story of the Wineville Murders (Paperback) 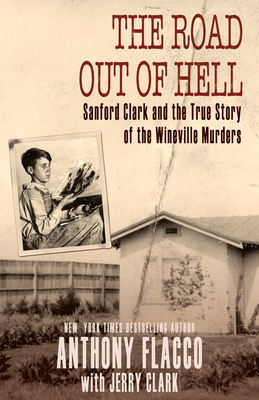 The Road Out of Hell: Sanford Clark and the True Story of the Wineville Murders (Paperback)


Available in Warehouse. Wait for Email Confirmation for ETA
"And you wonder: How the hell did this guy go on to be a loving father and grandfather? How did he bury all that crap? That's a story in itself." -Clint Eastwood, director of THE CHANGELING The film story of young Sanford Clark and his forced participation in the Wineville Murders was covered in Clint Eastwood's movie, THE CHANGELING, but for answers to the questions Eastwood posed after completing the project, turn to the true story of the Wineville murders: Anthony Flacco's THE ROAD OUT OF HELL. The hell part isn't what makes the story important; it's the road out that does. From 1926 to 1928, Gordon Stewart Northcott committed at least 20 murders on a chicken ranch outside of Los Angeles. His nephew, Sanford Clark, was held captive there from the age of 13 to 15, and was the sole surviving victim of the killing spree. Here, acclaimed crime writer Anthony Flacco-using never-before-heard information from Sanford's son, Jerry Clark-tells the real story behind the case that riveted the nation. Forced by Northcott to take part in the murders, Sanford carried tremendous guilt all his life. Yet despite his youth and the trauma, he helped gain some justice for the dead and their families by testifying at Northcott's trial-which led to his conviction and execution. It was a shocking story, but perhaps the most shocking part of all is the extraordinarily ordinary life Clark went on to live as a decorated WWII vet, a devoted husband of 55 years, a loving father, and a productive citizen. In dramatizing one of the darkest cases in American crime, Flacco constructs a riveting psychological drama about how Sanford was able to detoxify himself from the evil he'd encountered, offering the ultimately redemptive story of one man's remarkable ability to survive a nightmare and emerge intact.
Anthony Flacco was born in Oklahoma and grew up in Colorado Springs, Colorado, one of four brothers. Their father was an Air Force pilot and mother was a talented artist and painter. His background as a trained stage actor with over 2,000 performances under his Actors Equity membership provides the primary basis for his critically acclaimed ability to empathize with a wide cross-section of personalities. He moved into screenwriting when he was selected for the prestigious American Film Institute fellowship in Screenwriting. He received his MFA in screenwriting after winning AFI's Paramount Studios Fellowship Award and was then selected out of 2,000 entrants for the Walt Disney Studios Screenwriting Fellowship, where he spent a year writing for the Touchstone Pictures division. His screenwriting experience drives narrative stories that are visually compelling, whether for a movie theater or the screen of a reader's imagination. He previous works include A Checklist for Murder, which was adapted into an NBC movie of the week, The Last Nightengale, The Hidden Man, and The Road Out Of Hell: The True Story of Sanford Clark and the Wineville Murders. Tiny Dancer, originally published in 2005, received international acclaim, being names "one of the 100 Most Noteworthy Books of 2005." It is being released for the first time in eBook format in January 2013. He is an experienced public speaker and frequently gives seminars on crime writing, and is a featured speaker on writing for writers' conferences and clubs and serves as Editorial Consultant to Martin Literary Management in Seattle, WA. For more information, see www.AnthonyFlacco.com.