Buildings, Bridges, and Landmarks: A Complete History: A Model-Making and Collector's Book in One (Paperback) 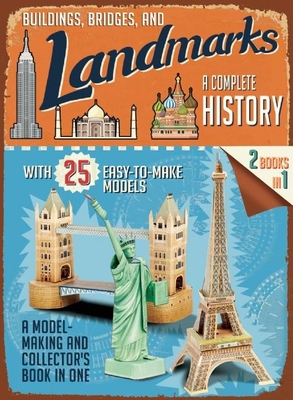 Buildings, Bridges, and Landmarks: A Complete History: A Model-Making and Collector's Book in One (Paperback)


This title is likely unavailable. Email or call for price and availability.
Build a complete history of bridges, buildings, and major landmarks!

Learn the history of famous buildings, bridges, and landmarks, and then build a three-dimensional model of each! There are 25 beautifully illustrated press-out models to build—everything from London's Tower Bridge to the Great Wall of China. Interesting facts and features are included about each structure and its place in history. Fun for the engineer in your life, or any world traveler!
Tony Chapman is an Honorary Fellow of the Royal Institute of British Architects and is an internationally recognized writer, architecture critic and-film maker. He has been a regular judge of RIBA Awards and was one of the visiting judges for the 2015 Mies van der Rohe Awards for European Contemporary Architecture. His film about Oscar Niemeyer was shown at the New York Architecture and Design Film Festival. As the RIBA's Head of Awards he has been responsible for the growth of the Stirling Prize since its inception in 1996. Tony lives in Twickenham, England.