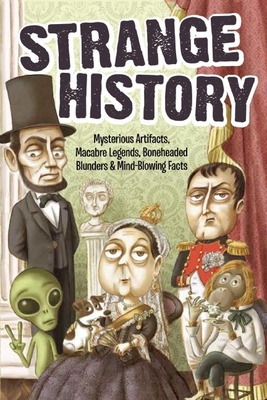 
Available in Warehouse. Wait for Email Confirmation for ETA
Whether it’s B.C. or A.D., you’ll be wondering WTF!

This exciting title from the folks at the Bathroom Readers' Institute contains the strangest short history articles from over 30 Bathroom Readers—along with 50 all-new pages. From the 20th century to the Old West, from the Age of Enlightenment to the Dark Ages, from ancient cultures all the way back to the dawn of time, Strange History is overflowing with mysterious artifacts, macabre legends, kooky inventions, reality-challenged rulers, boneheaded blunders, and mind-blowing facts. Read about…

And much, much more!
The Bathroom Readers' Institute is a tight-knit group of loyal and skilled writers, researchers, and editors who have been working as a team for years. The BRI understands the habits of a very special market—Throne Sitters—and devotes itself to providing amazing facts and conversation pieces.