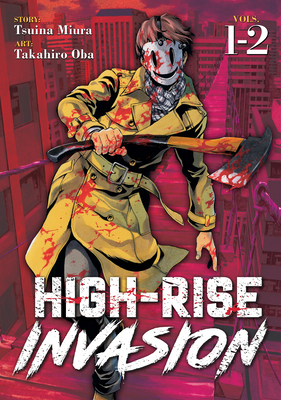 This is book number 1 in the High-Rise Invasion series.

A supernatural suspense story high above the streets from the creator of Ajin! On the roof of a high-rise building, a young girl named Yuri witnesses a masked figure split a man’s head open with an axe! It’s not exactly an everyday occurrence for a high schooler, but things only get weirder from there. Yuri soon finds herself in a strange world of skyscrapers with only two options for escape—fight past the mysterious masked figures or leap to her death!
Tsuina Miura is a Japanese author best known for his series Ajin and High-Rise Invasion. Takahiro Oba is a Japanese manga artist best known for High-Rise Invasion.