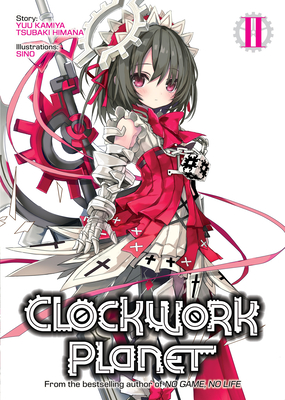 This is book number 2 in the Clockwork Planet (Light Novel) series.

PLEASE, DESTROY ME. Three weeks after the attempted purge of Kyoto Grid, Marie receives a mysterious transmission. She heads to Mie Grid to investigate with Halter, Naoto and RyuZU, but what they find is something–or someone–none of them could ever have anticipated! The thrilling second volume of the gearhead fantasy set in motion by Yuu Kamiya x Tsubaki Himana x Sino.
Yuu Kamiya is a Japanese author best known for No Game, No Life. Tsubaki Himana is a Japanese author best known for Clockwork Planet. Sino is a Japanese manga artist best known for the illustrations in the Clockwork Planet light novel, and as a contributor to a variety of anthology series.