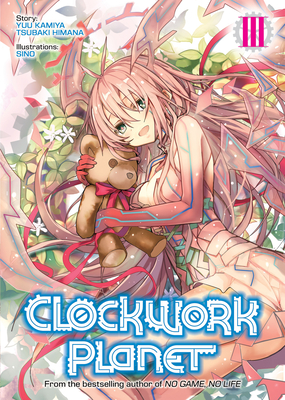 This is book number 3 in the Clockwork Planet (Light Novel) series.

AN ENORMOUS ELECTROMAGNET?! In the aftermath of rescuing AnchoR, Naoto and Marie are confronted with the horrifying truth of the weaponized behemoth's design: electromagnetic technology that can render clockwork useless! With AnchoR, RyuZU and Halter out of commission, the two geniuses find themselves caught between a desperate Tokyo Military and a doomsday weapon stronger than even they had anticipated!
Yuu Kamiya is a Japanese author best known for No Game, No Life. Tsubaki Himana is a Japanese author best known for Clockwork Planet. Sino is a Japanese manga artist best known for the illustrations in the Clockwork Planet light novel, and as a contributor to a variety of anthology series.