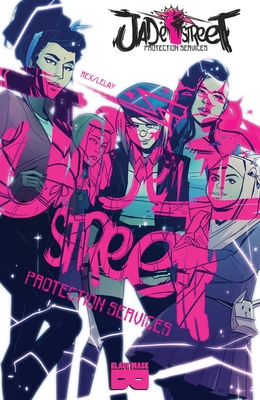 
This title is likely unavailable. Email or call for price and availability.
Teen delinquent magical girls fight patriarchy and systemic oppression in this whipsmart YA adventure.
Divya, Kai, Noemi, Saba, and Emma ditch detention and stumble upon an insidious social conspiracy that makes them question everything they thought they knew.
Combining punk rock ethos with manga aesthetic, Katy Rex (Charmed), Annie Wu (Black Canary), Kiki Jenkins (Sex Death Revolution), Fabian Lelay (We Are The Danger), and Mara Jayne Carpenter (Breathless) explore teen angst and class struggle with a healthy dose of love and laughs.
“The girls of Jade Street are not here for cosmetics and they don't fight using tiaras and magic rods. They are highly trained magical girls with a lust for life and a thirst for combat. And when things go south, they're the ones you want looking out for you. And they have that great strength that some other groups of magical girls lack, real honest diversity.” -Jeremy Whitley (Princeless, The Pirate Princess, The Unstoppable Wasp)"
Magdalene Visaggio is the Eisner and GLAAD Media Award-nominated writer of Eternity Girl, Morning in America, and Kim & Kim. Growing up in Richmond, Virginia, she moved to NYC after college and abandoned plans to join the clergy to write comic books where people hit each other with guitars. Visaggio came to wider prominence in the comic book industry with the limited series Kim & Kim from Black Mask Studios. The series was nominated for the 2017 Eisner Award for Best Limited Series and GLAAD Media Award for Outstanding Comic Book. The success led to Visaggio signing a three-book deal with Black Mask Studios for her next three projects: Quantum Teens Are Go, Kim & Kim: Love is a Battlefield and Sex Death Revolution. In 2017, she was chosen to take part in DC Comics’ Writer Workshop program following her Eisner nomination for Kim & Kim. Her first book with DC, Eternity Girl, was released in 2018 to critical acclaim/confusion. It’s a weird book. In 2018 her graphic novel The Ojja-Wojja: A Teenage Nightmare was bought by HarperCollins imprint Balzer + Bray. Her first graphic novel with HarperCollins is expected in Fall 2022. A transgender woman, Visaggio transitioned in 2016.
"These girls are mischievous, class-cutting, rambunctious teens, making this comic feel equal parts Sailor Moon and The Breakfast Club. It's a brilliant idea, and Jade brings both of those adolescent staples into the present in a way that's modern, relatable, touching, and gleefully rebellious."
— Vice

"Truly fun for all-audiences. I could easily see this as a show I'd rush home to watch after school, even late into my college days."
— Comicosity

"A mash-up between The Breakfast Club and Sailor Moon, Jade Street Protection Services tells the story of the delinquent students at an elite private school for magical girls."
— Comics Alliance

"There's been a handful of magical girl-type books to come out in the past year... but JSPS succeeds where a lot of these comics fail by giving a lot of time with the main cast and really fleshing them out."
— Newsarama