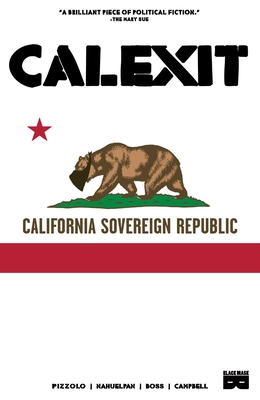 
This title is likely unavailable. Email or call for price and availability.
What if a fascist, autocratic President took over the United States? And what if that President lost California, the sixth largest economy on Earth, by nearly 2-to-1...a margin of almost 3 1/2 million votes? What if the day after that President took power, the largest mass demonstration in history occurred, and the state with the largest turnout was California. And then, the following week, two of the largest international airports in the world, California's LAX and SFO, were blockaded by protesters?

What if California refused to be ruled?

From the creators of YOUNG TERRORISTS, Matteo Pizzolo (GODKILLER) and Amancay Nahuelpan (CLANDESTINO), comes this tale of resisting oppression, punching Nazis, protecting each other, kicking ass, and demanding liberty for all.
Amancay Nahuelpan (pronounced Aman-kay Na-well-pan) is a comic artist who was born in Vancouver, Canada and grew up in the south of Chile. He graduated from University with a Major in Interior Design. He began his career working with independent Chilean publisher Caleuche Comics before breaking into the US market as a participant in the Zuda Comics Competitions. His first US published work was in OCCUPY COMICS. He has worked on NIGHTWING, BATMAN, Wonder Woman, JUSTICE LEAGUE DARK, and CRSH & LOBO for DC Comics, ROBOCOP for Boom!, BOY-1 for IDW, co-created YOUNG TERRORISTS and CALEXIT and created the tale of revolution CLANDESTINO for Black Mask which he writes, draws, colors, and letters.
(Starred) "This topical ongoing series, collected in a first volume, presents a scenario in which a thinly veiled Donald Trump is reelected and orders the deportation of all immigrants who are living in California illegally. California subsequently secedes and becomes a sanctuary state, leading the government to cut off resources and declare martial law as the region divides into several disparate factions. Fugitive refugee Zora Donato, a resistance fighter with a half-million-dollar bounty on her head, enlists the reluctant services of drug dealer/courier/smuggler Jamil to transport her to a safe house. They're dogged by Homeland Security enforcer Father Rossie, a sadistic nationalist. The insightful script is drawn with taut, four-color artwork, as Pizzolo (Godkiller) and Nahuelpan (Young Terrorists) weave a tense too-close-to-home nightmare with visuals that ground it in gritty detail. The collection is supplemented with interviews with the author and artist, a cover gallery, and other materials that bring into focus the political climate and factors that inspired the series. This rock-solid dystopian comic is thought-provoking and highly recommended."
— Publishers Weekly (Starred Review)

"It's not wish fulfillment: it's warning -- and a scarily imminent and salient warning at that. But that's not all: it's superb."
— Cory Doctorow

"Best Of The Year List: Calexit is both an excellent comic and a striking thought experiment. 'What if,' the comic asks, 'in response to Donald Trump’s draconian presidency, California simply decided to secede from the rest of the US?' It’s an idea that f
— io9

“CALEXIT is at the forefront of a range of comic books reacting to the current political climate. Far from a grim portrait of a country under siege... a hopeful and optimistic message about people and their relationship to political power."
— George Gene Gustines

"Best New Comics List: “Calexit may sound a bit on the nose. After all, it’s a tale about the establishment of a breakaway Californian republic in the wake of a presidency not too dissimilar from our current one. But trust me, it works. There are no easy gags about Californians, no silly jabs at Trumpism, and no over-the-top satire of our current state of decline. Instead, the creators have opted to tell a terrifyingly straightforward suspense story about the intrigues and crackdowns that ensue when governments decay and societies rot. The scariest thing about Calexit is how lived-in it feels — after all, every dystopia is just an accurate description of how things are for other people somewhere in the world, and this story just reminds us that we’re always a hair’s breadth away from the very bad things that we assume only happen in failed states.”
— Abraham Riesman

"You don’t have to reach out more than an inch to grasp how writer Matteo Pizzolo’s [work] fits into today’s political discourse… and there is nothing wrong with that. It’s only fair and right that art in all its forms would strike back with unmitigated f
— Gabriel Bell

“CALEXIT is a book that hits your brain like a slug to the chest. You finish it and your ears get a little hot. 10 out of 10”
— Pierce Lydon