Launch: An Internet Millionaire's Secret Formula to Sell Almost Anything Online, Build a Business You Love, and Live the Life (Paperback) 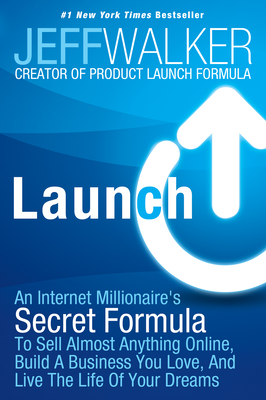 Launch: An Internet Millionaire's Secret Formula to Sell Almost Anything Online, Build a Business You Love, and Live the Life (Paperback)


This title is likely unavailable. Email or call for price and availability.
"Launch" will build your business---fast. Whether you've already got a business or you're itching to start one, this is a recipe for getting more traction.

Think about it---what if you could launch like Apple or the big Hollywood studios? What if your prospects eagerly counted down the days until they could buy your product? What if you could create such powerful positioning in your market that you all -but- eliminated your competition? And you could do all that no matter how humble your business or budget?

Since 1996 Jeff Walker has been creating hugely successful online launches. After bootstrapping his first Internet business from his basement, he quickly developed an underground process for launching new products and businesses with unprecedented success.

But the success-train was just getting started---once he started teaching his formula to other entrepreneurs, the results were simply breathtaking. Tiny, home-based businesses started doing launches that sold tens of thousands, hundreds of thousands, and even millions of dollars in sales with their launches.

"Launch" is the treasure map into that world---an almost secret world of digital entrepreneurs who create cash-on-demand paydays with their product launches and business launches.

Whether you have an existing business, or you have a service-based business and want to develop your own products so you can leverage your time and your impact, or you're still in the planning phase---this is how you start fast. This formula is how you engineer massive success.

Now the question is this---are you going to start slow, and fade away from there? Or are you ready for a launch that will change the future of your business and your life?

Jeff Walker started his first online business in 1996---way back in the Internet Dark Ages. After spending eight years honing his craft in a variety of niches, he started teaching his launch techniques to others in 2004. His Product Launch Formula literally invented the online launch model, and Jeff has now taught the model to thousands of clients, and those clients have generated over $500 million dollars in sales in hundreds of niches. You can follow him at JeffWalker.com.